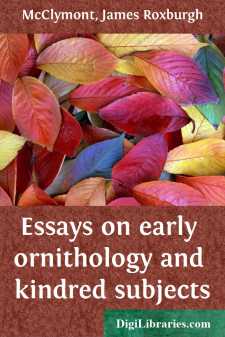 Marco Polo, had he confined himself to a sober narration of his travels, would have left to posterity a valuable record of the political institutions and national customs of the peoples of his day in the Far East. He was not satisfied with doing this, but added to his narrative a number of on-dit more or less marvellous in character, which he collected from credulous or inventive persons with whom he came into contact, principally from mariners and from other travellers.

Of these addenda to his story not one is more incredible than that of the rukh, and yet that addendum may be regarded as indicating the transition from the utterly incredible to the admixture of truth with fiction in bird-lore. For, whilst the rukh possessed some characteristics which are utterly fabulous, others are credible enough. We are told, for example, that it resembled an eagle, that it was carnivorous, that it possessed remarkable powers of flight, and that it visited islands which lay to the south of Zanzibar, within the influence of an ocean current which rendered difficult or impossible a voyage from these regions to India, and which therefore must have tended in a southerly direction. In this current we have no difficulty in recognising that of Mozambique. On the other hand, that the rukh had an expanse of wing of thirty paces, and that it could lift an elephant in its talons, are of course utterly incredible assertions.

The rukh therefore holds a position in bird-lore intermediate [p4] between that of the phœnix and that of the pelican fed upon the blood of its mother whose beak is tipped with red, or that of the barnacle goose, of which the name suggests the mollusc, the barnacle, and which was said to proceed from the mollusc or that of the bird of paradise, the feet of which were cut off by the Malay traders who sold the skins, and which were commonly reported never to have had feet, but to float perpetually in the air.

Thus two streams united into one floated the conception of the rukh—a mythological stream taking its rise from the simourgh of the Persians and a stream of fact taking its rise in the observation of a real bird which visited certain islands off the south-east coast of Africa, and which is said to have resembled an eagle and may have been a sea-eagle. With commendable reticence lexicographers tell us that ‘rukh’ was the name of a bird of mighty wing.

I.e., a fabulous mollusc; the barnacle is not now regarded as a mollusc.

There exists an anonymous narrative of the first voyage of Vasco da Gama to India under the title Roteiro da Viagem de Vasco da Gama em MCCCCXCVII. Although it is called a roteiro, it is in fact a purely personal and popular account of the voyage, and does not contain either sailing directions or a systematic description of all the ports which were visited, as one might expect in a roteiro. There is no reason to believe that it was written by Vasco da Gama. An officer in such high authority would not be likely to write his narrative anonymously. The faulty and variable orthography of the roteiro also renders improbable the hypothesis that Vasco da Gama was the author.