by A. (Arthur) Clutton-Brock 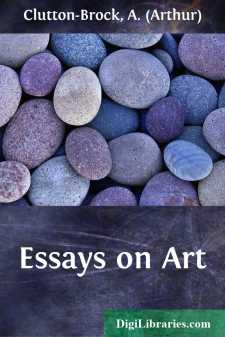 "The Adoration of the Magi"

There is one beauty of nature and another of art, and many attempts have been made to explain the difference between them. Signor Croce's theory, now much in favour, is that nature provides only the raw material for art. The beginning of the artistic process is the perception of beauty in nature; but an artist does not see beauty as he sees a cow. It is his own mind that imposes on the chaos of nature an order, a relation, which is beauty. All men have the faculty, in some degree, of imposing this order; the artist only does it more completely than other men, and he owes his power of execution to that. He can make the beauty which he has perceived because he has perceived it clearly; and this perceiving is part of the making.

Yet it is a distinction that we remain constantly aware of. In spite of Signor Croce and all the subtlety and partial truth of his theory, we do not believe that we make beauty when we see it, or that the artist makes it when he sees it. Nor do we believe that that beauty which he makes is of the same nature as that which he has perceived in reality. Rather he, like us, values the beauty which he perceives in reality because he knows that he has not made it. It is something, independent of himself, to which his own mind makes answer: that answer is his art; it is the passionate value expressed in it which gives beauty to his art. If he knew that the beauty he perceives was a product of his own mind, he could not value it so; if he held Signor Croce's theory, he would cease to be an artist.

And, in fact, those who act on his theory do cease to be artists. Nothing kills art so certainly as the effort to produce a beauty of the same kind as that which is perceived in nature. In the beauty of nature, as we perceive it, there is a perfection of workmanship which is perfection because there is no workmanship. Natural things are not made, but born; works of art are made. There is the essential difference between them and between their beauties. If a work of art tries to have the finish of a thing born, not made, if a piece of enamel apes the gloss of a butterfly's wing, it misses the peculiar beauty of art and is but an inadequate imitation of the beauty of nature....