Essays in Liberalism Being the Lectures and Papers Which Were Delivered at the Liberal Summer School at Oxford, 1922 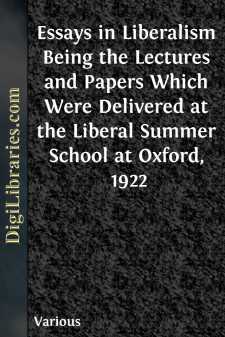 THE LEAGUE OF NATIONS AND THE REHABILITATION OF EUROPE By the Rt. Hon. Lord Robert Cecil K.C., M.P., Assistant Secretary of State for Foreign Affairs, 1918. Minister of Blockade, 1916-1918. Representative of Union of South Africa at Assembly of League of Nations.

Lord Robert Cecil said:—I ought to explain that I am here rather by accident. The speaker who was to have addressed you was my great personal friend, Professor Gilbert Murray, and you have greatly suffered because he is not present. He is prevented by being at Geneva on a matter connected with the League, and he suggested that I might take his place. I was very glad to do so, for, let me say quite frankly, I am ready to advocate the League of Nations before any assembly, certainly not least an assembly of Liberals. But not only an assembly of Liberals—I should be ready to advocate it even before an assembly of “Die-Hards.”

Your chairman has said, and said truly, that the League is not a party question. We welcome, we are anxious for support from every one. We have seen in another great country the very grave danger that may accrue to the cause of the League if it unhappily becomes identified with party politics. We welcome support, yes, I will say even from the Prime Minister; indeed no one will reject the support of the Prime Minister of England for any cause. I am bound to admit when I first read the speech to which reference has already been made, I was a little reminded of the celebrated letter of Dr. Johnson to Lord Chesterfield. Lord Chesterfield only began to recognise the value of Johnson’s works when Johnson had already succeeded, and in one of the bitter phrases Dr. Johnson then used he said, “Is not a patron one who looks with unconcern on a man struggling for life in the water, and when he has reached ground incommodes him with help?” That was a passing phase in my mind, and I am a little ashamed of it, because, after all, we cannot say the League has reached ground as yet. We need and are grateful for the help of any one who will genuinely come to its assistance. I hope we may look not only for words, but for deeds. The League needs all the support it can get in the very perilous and menacing times which are before us. I was glad to note that the Government has announced—it is one of the great test questions—that not only is it in favour of the entry of Germany into the League, but it would support the election of Germany to the Council of the League. That is an earnest of what we trust may be a real League policy from the Government of this country. And yet, though I have thought it right to emphasise the non-party aspect of this question, I am conscious, and I am sure all of you are, there are two ways in which the League is regarded. It is not only that, as your chairman would say, some people have more faith than others, but there is really a distinct attitude of mind adopted by some supporters of the League from that adopted by others.

The Two Views of the League

There is what I may call the empirical view of the League. There are those of us in this country, and indeed all over the world, who, profoundly impressed with the horrors of war, hating war from the bottom of their hearts as an evil thing—a company which must include, as far as I can see, all Christian men and women—these people, impressed with the horrors of war, look about for some means of keeping it away, some safeguard against its renewal. And they say: “We have tried everything else, we have tried the doctrine of the preparation for war as a great safeguard of peace; we have tried the doctrine of the Balance of Power; we have tried the doctrine of making one State or group of States so powerful that it can enforce its will on the rest of the world. We have tried all these expedients, and we are driven to the conclusion that they lead not to peace, but to war. Is there anything else?” And then they come quite legitimately to the League as their last hope of preserving the peace of the world. I was talking to a distinguished Frenchman the other day, and that was his attitude. It is the attitude of a great many people. In my judgment it is quite sound as far as it goes....