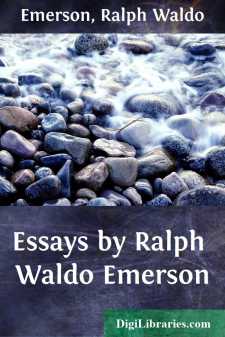 Ralph Waldo Emerson was born in Boston, May 25, 1803. He was descended from a long line of New England ministers, men of refinement and education. As a school-boy he was quiet and retiring, reading a great deal, but not paying much attention to his lessons. He entered Harvard at the early age of fourteen, but never attained a high rank there, although he took a prize for an essay on Socrates, and was made class poet after several others had declined. Next to his reserve and the faultless propriety of his conduct, his contemporaries at college seemed most impressed by the great maturity of his mind. Emerson appears never to have been really a boy. He was always serene and thoughtful, impressing all who knew him with that spirituality which was his most distinguishing characteristic.

After graduating from college he taught school for a time, and then entered the Harvard Divinity School under Dr. Channing, the great Unitarian preacher. Although he was not strong enough to attend all the lectures of the divinity course, the college authorities deemed the name Emerson sufficient passport to the ministry. He was accordingly "approbated to preach" by the Middlesex Association of Ministers on October 10, 1826. As a preacher, Emerson was interesting, though not particularly original. His talent seems to have been in giving new meaning to the old truths of religion. One of his hearers has said: "In looking back on his preaching I find he has impressed truths to which I always assented in such a manner as to make them appear new, like a clearer revelation." Although his sermons were always couched in scriptural language, they were touched with the light of that genius which avoids the conventional and commonplace. In his other pastoral duties Emerson was not quite so successful. It is characteristic of his deep humanity and his dislike for all fuss and commonplace that he appeared to least advantage at a funeral. A connoisseur in such matters, an old sexton, once remarked that on such occasions "he did not appear at ease at all. To tell the truth, in my opinion, that young man was not born to be a minister."

Emerson did not long remain a minister. In 1832 he preached a sermon in which he announced certain views in regard to the communion service which were disapproved by a large part of his congregation. He found it impossible to continue preaching, and, with the most friendly feelings on both sides, he parted from his congregation.

A few months later (1833) he went to Europe for a short year of travel. While abroad, he visited Walter Savage Landor, Coleridge and Wordsworth, and Thomas Carlyle. This visit to Carlyle was to both men a most interesting experience. They parted feeling that they had much intellectually in common. This belief fostered a sympathy which, by the time they had discovered how different they really were, had grown so strong a habit that they always kept up their intimacy. This year of travel opened Emerson's eyes to many things of which he had previously been ignorant; he had profited by detachment from the concerns of a limited community and an isolated church.

After his return he began to find his true field of activity in the lecture-hall, and delivered a number of addresses in Boston and its vicinity. While thus coming before the open public on the lecture platform, he was all the time preparing the treatise which was to embody all the quintessential elements of his philosophical doctrine. This was the essay Nature, which was published in 1836. By its conception of external Nature as an incarnation of the Divine Mind it struck the fundamental principle of Emerson's religious belief. The essay had a very small circulation at first, though later it became widely known.

In the winter of 1836 Emerson followed up his discourse on Nature by a course of twelve lectures on the "Philosophy of History," a considerable portion of which eventually became embodied in his essays....