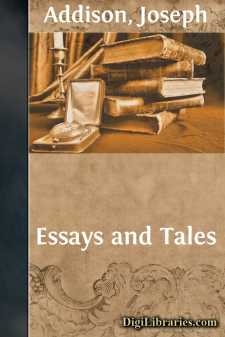 The sixty-fourth volume of this Library contains those papers from the Tatler which were especially associated with the imagined character of Isaac Bickerstaff, who was the central figure in that series; and in the twenty-ninth volume there is a similar collection of papers relating to the Spectator Club and Sir Roger de Coverley, who was the central figure in Steele and Addison’s Spectator.  Those volumes contained, no doubt, some of the best Essays of Addison and Steele.  But in the Tatler and Spectator are full armouries of the wit and wisdom of these two writers, who summoned into life the army of the Essayists, and led it on to kindly war against the forces of Ill-temper and Ignorance.  Envy, Hatred, Malice, and all their first cousins of the family of Uncharitableness, are captains under those two commanders-in-chief, and we can little afford to dismiss from the field two of the stoutest combatants against them.  In this volume it is only Addison who speaks; and in another volume, presently to follow, there will be the voice of Steele.

The two friends differed in temperament and in many of the outward signs of character; but these two little books will very distinctly show how wholly they agreed as to essentials.  For Addison, Literature had a charm of its own; he delighted in distinguishing the finer graces of good style, and he drew from the truths of life the principles of taste in writing.  For Steele, Literature was the life itself; he loved a true book for the soul he found in it.  So he agreed with Addison in judgment.  But the six papers on “Wit,” the two papers on “Chevy Chase,” contained in this volume; the eleven papers on “Imagination,” and the papers on “Paradise Lost,” which may be given in some future volume; were in a form of study for which Addison was far more apt than Steele.  Thus as fellow-workers they gave a breadth to the character of Tatler and Spectator that could have been produced by neither of them, singly.

The reader of this volume will never suppose that the artist’s pleasure in good art and in analysis of its constituents removes him from direct enjoyment of the life about him; that he misses a real contact with all the world gives that is worth his touch.  Good art is but nature, studied with love trained to the most delicate perception; and the good criticism in which the spirit of an artist speaks is, like Addison’s, calm, simple, and benign.  Pope yearned to attack John Dennis, a rough critic of the day, who had attacked his “Essay on Criticism.”  Addison had discouraged a very small assault of words.  When Dennis attacked Addison’s “Cato,” Pope thought himself free to strike; but Addison took occasion to express, through Steele, a serious regret that he had done so.  True criticism may be affected, as Addison’s was, by some bias in the canons of taste prevalent in the writer’s time, but, as Addison’s did in the Chevy-Chase papers, it will dissent from prevalent misapplications of them, and it can never associate perception of the purest truth and beauty with petty arrogance, nor will it so speak as to give pain.  When Wordsworth was remembering with love his mother’s guidance of his childhood, and wished to suggest that there were mothers less wise in their ways, he was checked, he said, by the unwillingness to join thought of her “with any thought that looks at others’ blame.”  So Addison felt towards his mother Nature, in literature and in life.  He attacked nobody.  With a light, kindly humour, that was never personal and never could give pain, he sought to soften the harsh lines of life, abate its follies, and inspire the temper that alone can overcome its wrongs....