Esoteric Christianity, or The Lesser Mysteries 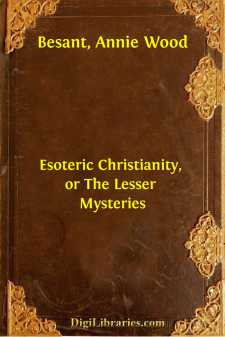 The object of this book is to suggest certain lines of thought as to the deep truths underlying Christianity, truths generally overlooked, and only too often denied. The generous wish to share with all what is precious, to spread broadcast priceless truths, to shut out none from the illumination of true knowledge, has resulted in a zeal without discretion that has vulgarised Christianity, and has presented its teachings in a form that often repels the heart and alienates the intellect. The command to "preach the Gospel to every creature"—though admittedly of doubtful authenticity—has been interpreted as forbidding the teaching of the Gnosis to a few, and has apparently erased the less popular saying of the same Great Teacher: "Give not that which is holy unto the dogs, neither cast ye your pearls before swine."

This spurious sentimentality—which refuses to recognise the obvious inequalities of intelligence and morality, and thereby reduces the teaching of the highly developed to the level attainable by the least evolved, sacrificing the higher to the lower in a way that injures both—had no place in the virile common sense of the early Christians. S. Clement of Alexandria says quite bluntly, after alluding to the Mysteries: "Even now I fear, as it is said, 'to cast the pearls before swine, lest they tread them underfoot, and turn and rend us.' For it is difficult to exhibit the really pure and transparent words respecting the true Light to swinish and untrained hearers."

If true knowledge, the Gnosis, is again to form a part of Christian teachings, it can only be under the old restrictions, and the idea of levelling down to the capacities of the least developed must be definitely surrendered. Only by teaching above the grasp of the little evolved can the way be opened up for a restoration of arcane knowledge, and the study of the Lesser Mysteries must precede that of the Greater. The Greater will never be published through the printing-press; they can only be given by Teacher to pupil, "from mouth to ear." But the Lesser Mysteries, the partial unveiling of deep truths, can even now be restored, and such a volume as the present is intended to outline these, and to show the nature of the teachings which have to be mastered. Where only hints are given, quiet meditation on the truths hinted at will cause their outlines to become visible, and the clearer light obtained by continued meditation will gradually show them more fully. For meditation quiets the lower mind, ever engaged in thinking about external objects, and when the lower mind is tranquil then only can it be illuminated by the Spirit. Knowledge of spiritual truths must be thus obtained, from within and not from without, from the divine Spirit whose temple we are and not from an external Teacher. These things are "spiritually discerned" by that divine indwelling Spirit, that "mind of Christ," whereof speaks the Great Apostle, and that inner light is shed upon the lower mind.

This is the way of the Divine Wisdom, the true Theosophy. It is not, as some think, a diluted version of Hinduism, or Buddhism, or Taoism, or of any special religion. It is Esoteric Christianity as truly as it is Esoteric Buddhism, and belongs equally to all religions, exclusively to none. This is the source of the suggestions made in this little volume, for the helping of those who seek the Light—that "true Light which lighteth every man that cometh into the world," though most have not yet opened their eyes to it. It does not bring the Light....