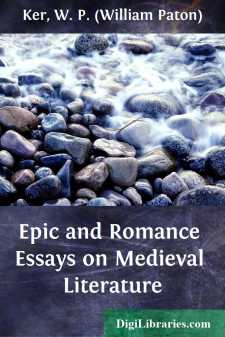 This book is now reprinted without addition or change, except in a few small details. If it had to be written over again, many things, no doubt, would be expressed in a different way. For example, after some time happily spent in reading the Danish and other ballads, I am inclined to make rather less of the interval between the ballads and the earlier heroic poems, and I have learned (especially from Dr. Axel Olrik) that the Danish ballads do not belong originally to simple rustic people, but to the Danish gentry in the Middle Ages. Also the comparison of Sturla's Icelandic and Norwegian histories, though it still seems to me right in the main, is driven a little too far; it hardly does enough justice to the beauty of the Life of Hacon (Hákonar Saga), especially in the part dealing with the rivalry of the King and his father-in-law Duke Skule. The critical problems with regard to the writings of Sturla are more difficult than I imagined, and I am glad to have this opportunity of referring, with admiration, to the work of my friend Dr. Björn Magnússon Olsen on the Sturlunga Saga (in Safn til Sögu Islands, iii. pp. 193-510, Copenhagen, 1897). Though I am unable to go further into that debatable ground, I must not pass over Dr. Olsen's argument showing that the life of the original Sturla of Hvamm (v. inf. pp. -256) was written by Snorri himself; the story of the alarm and pursuit () came from the recollections of Gudny, Snorri's mother.

In the Chansons de Geste a great discovery has been made since my essay was written; the Chançun de Willame, an earlier and ruder version of the epic of Aliscans, has been printed by the unknown possessor of the manuscript, and generously given to a number of students who have good reason to be grateful to him for his liberality. There are some notes on the poem in Romania (vols. xxxii. and xxxiv.) by M. Paul Meyer and Mr. Raymond Weeks, and it has been used by Mr. Andrew Lang in illustration of Homer and his age. It is the sort of thing that the Greeks willingly let die; a rough draught of an epic poem, in many ways more barbarous than the other extant chansons de geste, but full of vigour, and notable (like le Roi Gormond, another of the older epics) for its refrain and other lyrical passages, very like the manner of the ballads. The Chançun de Willame, it may be observed, is not very different from Aliscans with regard to Rainouart, the humorous gigantic helper of William of Orange. One would not have been surprised if it had been otherwise, if Rainouart had been first introduced by the later composer, with a view to "comic relief" or some such additional variety for his tale. But it is not so; Rainouart, it appears, has a good right to his place by the side of William. The grotesque element in French epic is found very early, e.g. in the Pilgrimage of Charlemagne, and is not to be reckoned among the signs of decadence.

There ought to be a reference, on below, to M. Joseph Bédier's papers in the Revue Historique (xcv....