Entertainments for Home, Church and School 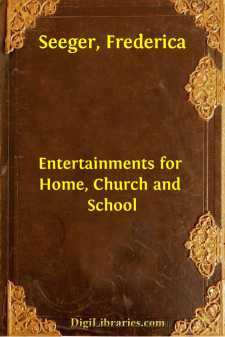 A lively game of "talk and touch." The company is seated in a circle, and one who understands the game commences by saying to his neighbor at the right:

"I have been shopping."

"What did you buy?" is the required response.

"A dress," "a book," "some flowers," "a pencil"—whatever the first speaker wishes, provided always that he can, in pronouncing the word, touch the object mentioned. Then the second player addresses his neighbor in similar manner, and so on around the circle until the secret of the game is discovered by all.

Whoever mentions an object without touching it, or names one that has already been given, pays a forfeit.

This feat is a very amusing one, and is performed as follows: Two persons kneel on the ground, facing each other. Each holds in his left hand a candle in a candlestick, at the same time grasping his right foot in his right hand. This position compels him to balance himself on his left knee. One of the candles is lighted; the other is not. The holders are required to light the unlighted candle from the lighted one. The conditions are simple enough, but one would hardly believe how often the performers will roll over on the floor before they succeed in lighting the candle. It will be found desirable to spread a newspaper on the floor between the combatants. Many spots of candle-grease will thus be intercepted, and the peace of mind of the lady of the house proportionately spared.

Great amusement is excited by this game when played in the presence of a company of guests. Spread a sheet upon the floor and place two chairs upon it. Seat two of the party in the chairs within reach of each other and blindfold them. Give each a saucer of cracker or bread crumbs and a spoon, then request them to feed each other. The frantic efforts of each victim to reach his fellow sufferer's mouth is truly absurd—the crumbs finding lodgment in the hair, ears and neck much oftener than the mouth. Sometimes bibs are fastened around the necks of the victims for protection.

The company is divided into two equal parts and blank cards and pencils are distributed. One side writes questions on any subject desired, while the other prepares in like manner a set of haphazard answers. The question cards are then collected and distributed to the players on the other side, while their answer are divided among the questioners. The leader holding a question then reads it aloud, the first player on the other side reading the answer he holds. Some of the answers are highly amusing.

THE GAME OF RHYMES

A variation of the former game. The game is begun by a young lady or gentleman speaking a single line, to which the next nearest on the left must respond with another line to rhyme with the first. The next player gives a new line, of the same length, and the fourth supplies a rhyme in turn, and so on. The game is provocative of any amount of fun and nonsense. A sample may be given: