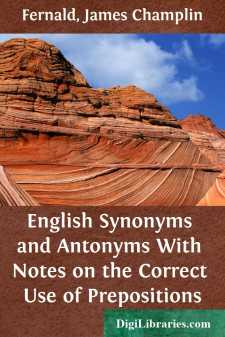 Add to My Favorites
Published: 9 years ago
Downloads: 227
Rating: (0 Votes)

The English language is peculiarly rich in synonyms, as, with such a history, it could not fail to be. From the time of Julius Cæsar, Britons, Romans, Northmen, Saxons, Danes, and Normans fighting, fortifying, and settling upon the soil of England, with Scotch and Irish contending for mastery or existence across the mountain border and the Channel, and all fenced in together by the sea, could not but influence each other's speech. English merchants, sailors, soldiers, and travelers, trading, warring, and exploring in every clime, of necessity brought back new terms of sea and shore, of shop and camp and battlefield. English scholars have studied Greek and Latin for a thousand years, and the languages of the Continent and of the Orient in more recent times. English churchmen have introduced words from Hebrew, Greek, and Latin, through Bible and prayer-book, sermon and tract. From all this it results that there is scarcely a language ever spoken among men that has not some representative in English speech. The spirit of the Anglo-Saxon race, masterful in language as in war and commerce, has subjugated all these various elements to one idiom, making not a patchwork, but a composite language. Anglo-Saxon thrift, finding often several words that originally expressed the same idea, has detailed them to different parts of the common territory or to different service, so that we have an almost unexampled variety of words, kindred in meaning but distinct in usage, for expressing almost every shade of human thought.

Scarcely any two of such words, commonly known as synonyms, are identical at once in signification and in use. They have certain common ground within which they are interchangeable; but outside of that each has its own special province, within which any other word comes as an intruder. From these two qualities arises the great value of synonyms as contributing to beauty and effectiveness of expression. As interchangeable, they make possible that freedom and variety by which the diction of an accomplished writer or speaker differs from the wooden uniformity of a legal document. As distinct and specific, they enable a master of style to choose in every instance the one term that is the most[viii] perfect mirror of his thought. To write or speak to the best purpose, one should know in the first place all the words from which he may choose, and then the exact reason why in any case any particular word should be chosen. To give such knowledge in these two directions is the office of a book of synonyms.

"His poetry acts like an incantation. Its merit lies less in its obvious meaning than in its occult power. There would seem, at first sight, to be no more in his words than in other words. But they are words of enchantment. No sooner are they pronounced, than the past is present and the distant near. New forms of beauty start at once into existence, and all the burial places of the memory give up their dead. Change the structure of the sentence; substitute one synonym for another, and the whole effect is destroyed....