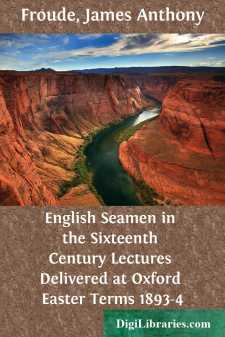 LECTURE I THE SEA CRADLE OF THE REFORMATION

Jean Paul, the German poet, said that God had given to France the empire of the land, to England the empire of the sea, and to his own country the empire of the air. The world has changed since Jean Paul's days. The wings of France have been clipped; the German Empire has become a solid thing; but England still holds her watery dominion; Britannia does still rule the waves, and in this proud position she has spread the English race over the globe; she has created the great American nation; she is peopling new Englands at the Antipodes; she has made her Queen Empress of India; and is in fact the very considerable phenomenon in the social and political world which all acknowledge her to be. And all this she has achieved in the course of three centuries, entirely in consequence of her predominance as an ocean power. Take away her merchant fleets; take away the navy that guards them: her empire will come to an end; her colonies will fall off, like leaves from a withered tree; and Britain will become once more an insignificant island in the North Sea, for the future students in Australian and New Zealand universities to discuss the fate of in their debating societies.

How the English navy came to hold so extraordinary a position is worth reflecting on. Much has been written about it, but little, as it seems to me, which touches the heart of the matter. We are shown the power of our country growing and expanding. But how it grew, why, after a sleep of so many hundred years, the genius of our Scandinavian forefathers suddenly sprang again into life—of this we are left without explanation.

The beginning was undoubtedly the defeat of the Spanish Armada in 1588. Down to that time the sea sovereignty belonged to the Spaniards, and had been fairly won by them. The conquest of Granada had stimulated and elevated the Spanish character. The subjects of Ferdinand and Isabella, of Charles V. and Philip II., were extraordinary men, and accomplished extraordinary things. They stretched the limits of the known world; they conquered Mexico and Peru; they planted their colonies over the South American continent; they took possession of the great West Indian islands, and with so firm a grasp that Cuba at least will never lose the mark of the hand which seized it. They built their cities as if for eternity. They spread to the Indian Ocean, and gave their monarch's name to the Philippines. All this they accomplished in half a century, and, as it were, they did it with a single hand; with the other they were fighting Moors and Turks and protecting the coast of the Mediterranean from the corsairs of Tunis and Constantinople.

They had risen on the crest of the wave, and with their proud Non sufficit orbis were looking for new worlds to conquer, at a time when the bark of the English water-dogs had scarcely been heard beyond their own fishing-grounds, and the largest merchant vessel sailing from the port of London was scarce bigger than a modern coasting collier. And yet within the space of a single ordinary life these insignificant islanders had struck the sceptre from the Spaniards' grasp and placed the ocean crown on the brow of their own sovereign. How did it come about? What Cadmus had sown dragons' teeth in the furrows of the sea for the race to spring from who manned the ships of Queen Elizabeth, who carried the flag of their own country round the globe, and challenged and fought the Spaniards on their own coasts and in their own harbours...?