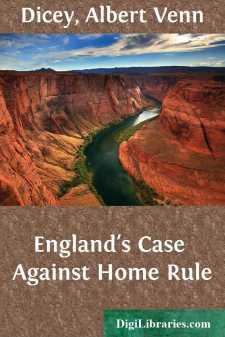 CHAPTER I. NATURE OF THE ARGUMENT. Aim and line of argument

My aim is to criticise from a purely English point of view the policy of Home Rule, or the proposal to create a more or less independent Parliament in Ireland; and as a result of such criticism to establish the truth, and develop the consequences, of this proposition—namely, that any system of Home Rule, whatever be the form it takes, is less beneficial to Great Britain, or (to use popular language) to England, than is the maintenance of the Union, and is at least as much opposed to the vital interests of England as would be the national independence of Ireland.

The train of reasoning by which it is sought to establish this principle, and the consequences which the principle involves, consists of the following steps: first, an examination into the causes which give strength to the Home Rule movement in England, and the nature of the arguments in its support used by English Home Rulers; secondly, a statement of the advantages and disadvantages, from an English point of view, on the one hand of maintaining the Union, and on the other of separation from Ireland; thirdly, a criticism of each of the principal forms under which Home Rule has been actually presented to the attention of the public, the aim of such criticism being in each case to determine how far the particular form of Home Rule can compete as regards the interests of England with the alternative policies of Unionism and of Irish independence; and, fourthly, a summary of the conclusions arrived at by this survey of the policy of Home Rule. My endeavour will be to make this survey without any appeal to prejudice, passion, or sentiment, and with the calmness and fairness which a scientific constitutionalist should display in weighing the merits of any other proposed alteration in our form of government, such for example as the introduction of life peers into the House of Lords, or in estimating the value of some foreign constitutional invention, such for example as the Swiss Referendum or the Dual system which links together Hungary and the Austrian Empire. No citizen of the United Kingdom indeed can pretend to be an impartial critic of a policy which divides the whole nation into opposing parties. But during a period of revolutionary excitement it is well to remember that any legislative innovation, however keen the feelings of partisanship which it may arouse, is always in itself capable of being looked at from a logical or abstract point of view, and ought to be so looked at by jurists. To one class indeed among the advocates of Home Rule the fundamental principle contended for in these pages will appear irrelevant to the points at issue between such Home Rulers and their opponents. Nationalists, who still occupy the position held in 1848 by Sir Gavan Duffy and his friends, and who either openly contend for the right of Ireland to be an independent nation, or accept Home Rule (as they may with perfect fairness) simply as a step towards the independence of their country, are naturally and rightly unaffected by reasoning which shows, however conclusively, that Home Rule may be as injurious to England as a complete severance of the political connection between England and Ireland....