England of My Heart : Spring 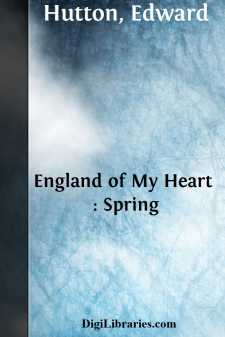 When I determined to set out once more to traverse and to possess England of my heart, it was part of my desire first of all to follow, as far as might be, in the footsteps of Chaucer's pilgrims. Therefore I sought the Tabard Inn in Southwark.

For true delight, it seems to me, a journey, especially if it be for love or pleasure, should always have about it something of devotion, something a little rigid too, and dutiful, at least in its opening stages; and in thus determining my way I secured this. For I promised myself that I would start from the place whence they set out so long ago to visit and to pray at the tomb of the greatest of English saints, that I would sleep where they slept, find pleasure in the villages they enjoyed, climb the hills and look on the horizons that greeted them also so many hundred years ago, till at last I stood by the "blissful martyr's tomb," that had once made so great a rumour in the world and now was nothing.

In many ways I came short of all this, as will be seen; but especially in one thingвЂ”the matter of time. Chaucer and his pilgrims are generally thought to have spent three and a half or four days and three nights upon the road. It is true they went ahorseback and I afoot, but nevertheless a man may easily walk the fifty-six miles from London to Canterbury in four days. I failed because I found so much to see by the wayside. And to begin with there was London itself, which I was about to leave.

It was very early on an April morning when I set out from my home, coming through London on foot and crossing the river by London Bridge. It was there I lingered first, in the half light, as it were to say good-bye.

I do not know what it is in London that at long last and in some quite impersonal way clutches at the heart and receives one's eager affection. At first, even though you be one of her children, she seems and for how long like something fallen, calling you with the monotonous, mighty, complaining voice of a fallen archangel, ceaselessly through the days, the years, the centuries and the ages. She is one of the oldest of European cities, she is one of the most beautiful, of all capitals she is by far the most full of character: and yet she is not easy to know or to love. Perhaps she does not belong to us, but is something apart, something in and for herself, a mighty and a living thing, owing us nothing and regarding us, whom she tortures, with a sort of indifference, if not contempt.

And yet she is ours after all; she belongs to us, is more perhaps our very likeness and self than the capital of any other people. What is Berlin but a brutalised village, or Paris now but cosmopolis, or Rome but a universe? She is ours, the very gate of England of my heart. For she stands there striding the boundary of my country, the greatest of our cities, the greatest even of our industrial citiesвЂ”a negative to all the rest. To the North she says Nay continually, for she is English, the greater successor of Winchester, and in her voice is the soul of the South, the real England, the England of my heart....