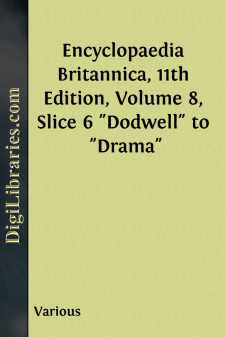 DODWELL, EDWARD (1767-1832), English traveller and writer on archaeology. He belonged to the same family as Henry Dodwell the theologian, and was educated at Trinity College, Cambridge. He travelled from 1801 to 1806 in Greece, and spent the rest of his life for the most part in Italy, at Naples and Rome. He died at Rome on the 13th of May 1832, from the effects of an illness contracted in 1830 during a visit of exploration to the Sabine Mountains. His widow, a daughter of Count Giraud, thirty years his junior, subsequently became famous as the “beautiful” countess of Spaur, and played a considerable rôle in the political life of the papal city. He published A Classical and Topographical Tour through Greece (1819), of which a German translation appeared in 1821; Views in Greece, thirty coloured plates (1821); and Views and Descriptions of Cyclopian or Pelasgic Remains in Italy and Greece (London and Paris, with French text, 1834).

DODWELL, HENRY (1641-1711), scholar, theologian and controversial writer, was born at Dublin in October, 1641. His father, having lost his property in Connaught during the rebellion, settled at York in 1648. Here Henry received his preliminary education at the free school. In 1654 he was sent by his uncle to Trinity College, Dublin, of which he subsequently became scholar and fellow. Having conscientious objections to taking orders he relinquished his fellowship in 1666, but in 1688 he was elected Camden professor of history at Oxford. In 1691 he was deprived of his professorship for refusing to take the oath of allegiance to William and Mary. Retiring to Shottesbrooke in Berkshire, and living on the produce of a small estate in Ireland, he devoted himself to the study of chronology and ecclesiastical polity. Gibbon speaks of his learning as “immense,” and says that his “skill in employing facts is equal to his learning,” although he severely criticizes his method and style. Dodwell’s works on ecclesiastical polity are more numerous and of much less value than those on chronology, his judgment being far inferior to his power of research. In his earlier writings he was regarded as one of the greatest champions of the non-jurors; but the doctrine which he afterwards promulgated, that the soul is naturally mortal, and that immortality could be enjoyed only by those who had received baptism from the hands of one set of regularly ordained clergy, and was therefore a privilege from which dissenters were hopelessly excluded, did not strengthen his reputation. Dodwell died at Shottesbrooke on the 7th of June 1711. His chief works on classical chronology are: A Discourse concerning Sanchoniathon’s Phoenician History (1681); Annales Thucydidei et Xenophontei (1702); Chronologia Graeco-Romana pro hypothesibus Dion. Halicarnassei (1692); Annales Velleiani, Quintilianei, Statiani (1698); and a larger treatise entitled De veteribus Graecorum Romanorumque Cyclis (1701).

His eldest son Henry (d. 1784) is known as the author of a pamphlet entitled Christianity not founded on Argument, to which a reply was published by his brother William (1709-1785), who was besides engaged in a controversy with Dr Conyers Middleton on the subject of miracles....