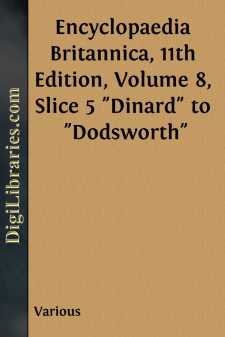 DINARD, a seaside town of north-western France, in the department of Ille-et-Vilaine. The town, which is the chief watering-place of Brittany, is situated on a rocky promontory at the mouth of the Rance opposite St Malo, which is about 1 m. distant. It is a favourite resort of English and Americans as well as of the French, its attractions being the beauty of its situation, the mildness of the climate and the good bathing. It has two casinos and numerous luxurious hotels and elegant villas. Together with the adjoining watering-place of St Enogat, Dinard has a population of 4882 (1906).

DINDIGUL, a town of British India, in the Madura district of Madras, 880 ft. above the sea, 40 m. from Madura by rail. Pop. (1901) 25,182. Dindigul has risen into importance as the centre of a trade in tobacco and manufacture of cigars, which are exported to England. There are two large European cigar factories here. The town has manufactures oe silk, muslim#and blankets, and an export trade in hides and cardamoms; and there is a large native Christian population, with two churches. The ancient fort, well preserved, stands on a rock rising 350 ft. above the town; this was formerly a position of great strategic importance, commanding passes into Madura from Coimbatore, and figured prominently in the military operations of the Mahrattas in the 17th and 18th centuries, and of Hyder Ali in 1755 seq., being thrice captured by the British (1767, 1783, 1790). After the two first captures it was restored to Hyder Ali under treaty; after the third it was ceded to the East India Company.

KARL WILHELM DINDORF (1802-1883), German classical scholar, was born at Leipzig on the 2nd of January 1802. From his earliest years he showed a strong taste for classical studies, and after completing F. Invernizi’s edition of Aristophanes at an early age, and editing several grammarians and rhetoricians, was in 1828 appointed extraordinary professor of literary history in his native city. Disappointed at not obtaining the ordinary professorship when it became vacant in 1833, he resigned his post in the same year, and devoted himself entirely to study and literary work. His attention had at first been chiefly given to Athenaeus, whom he edited in 1827, and to the Greek dramatists, all of whom he edited separately and combined in his Poetae scenici Graeci (1830 and later editions). He also wrote a work on the metres of the Greek dramatic poets, and compiled special lexicons to Aeschylus and Sophocles. He edited Procopius for Niebuhr’s Corpus of the Byzantine writers, and between 1846 and 1851 brought out at Oxford an important edition of Demosthenes; he also edited Lucian and Josephus for the Didot classics. His last important editorial labour was his Eusebius of Caesarea (1867-1871). Much of his attention was occupied by the republication of Stephanus’s Thesaurus (Paris, 1831-1865), chiefly executed by him and his brother Ludwig, a work of prodigious labour and utility. His reputation suffered somewhat through the imposture practised upon him by the Greek Constantine Simonides, who succeeded in deceiving him by a fabricated fragment of the Greek historian Uranius....