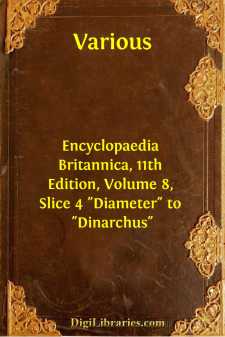 DIAMETER (from the Gr. διÎ¬, through, μÎ­τρον, measure), in geometry, a line passing through the centre of a circle or conic section and terminated by the curve; the “principal diameters” of the ellipse and hyperbola coincide with the “axes” and are at right angles; “conjugate diameters” are such that each bisects chords parallel to the other. The diameter of a quadric surface is a line at the extremities of which the tangent planes are parallel. Newton defined the diameter of a curve of any order as the locus of the centres of the mean distances of the points of intersection of a system of parallel chords with the curve; this locus may be shown to be a straight line. The word is also used as a unit of linear measurement of the magnifying power of a lens or microscope.

In architecture, the term is used to express the measure of the lower part of the shaft of a column. It is employed by Vitruvius (iii. 2) to determine the height of a column, which should vary from eight to ten diameters according to the intercolumniation: and it is generally the custom to fix the lower diameter of the shaft by the height required and the Order employed. Thus the diameter of the Roman Doric should be about one-eighth of the height, that of the Ionic one-ninth, and of the Corinthian one-tenth (see ).

DIAMOND, a mineral universally recognized as chief among precious stones; it is the hardest, the most imperishable, and also the most brilliant of minerals. These qualities alone have made it supreme as a jewel since early times, and yet the real brilliancy of the stone is not displayed until it has been faceted by the art of the lapidary (q.v.); and this was scarcely developed before the year 1746. The consummate hardness of the diamond, in spite of its high price, has made it most useful for purposes of grinding, polishing and drilling. Numerous attempts have been made to manufacture the diamond by artificial means, and these attempts have a high scientific interest on account of the mystery which surrounds the natural origin of this remarkable mineral. Its physical and chemical properties have been the subject of much study, and have a special interest in view of the extraordinary difference between the physical characters of the diamond and those of graphite (blacklead) or charcoal, with which it is chemically identical, and into which it can be converted by the action of heat or electricity. Again, on account of the great value of the diamond, much of the romance of precious stones has centred round this mineral; and the history of some of the great diamonds of historic times has been traced through many extraordinary vicissitudes.

The name Î†δÎ¬μας, “the invincible,” was probably applied by the Greeks to hard metals, and thence to corundum (emery) and other hard stones. According to Charles William King, the first undoubted application of the name to the diamond is found in Manilius (a.d. 16),—Sic Adamas, punctum lapidis, pretiosior auro,—and Pliny (a.d....