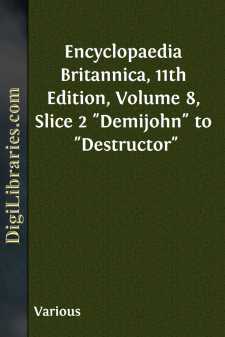 DEMIJOHN, a glass bottle or jar with a large round body and narrow neck, encased in wicker-work and provided with handles. The word is also used of an erthenware jar, similarly covered with wicker. The capacity of a demijohn varies from two to twelve gallons, but the common size contains five gallons. According to the New English Dictionary the word is an adaptation of a French Dame Jeanne, or Dame Jane, an application of a personal name to an object which is not uncommon; cf. the use of “Toby” for a particular form of jug and the many uses of the name “Jack.”

DEMISE, an Anglo-French legal term (from the Fr. démettre, Lat. dimittere, to send away) for a transfer of an estate, especially by lease. The word has an operative effect in a lease implying a covenant for “quiet enjoyment” (see ). The phrase “demise of the crown” is used in English law to signify the immediate transfer of the sovereignty, with all its attributes and prerogatives, to the successor without any interregnum in accordance with the maxim “the king never dies.” At common law the death of the sovereign eo facto dissolved parliament, but this was abolished by the Representation of the People Act 1867, § 51. Similarly the common law doctrine that all offices held under the crown determined at its demise has been negatived by the Demise of the Crown Act 1901. “Demise” is thus often used loosely for death or decease.

DEMIURGE (Gr. δημιουργÏŒς, from δÎ®μιος, of or for the people, and á¼’ργον, work), a handicraftsman or artisan. In Homer the word has a wide application, including not only hand-workers but even heralds and physicians. In Attica the demiurgi formed one of the three classes (with the Eupatridae and the geomori, georgi or agroeci) into which the early population was divided (cf. Arist. Ath. Pol. xiii. 2). They represented either a class of the whole population, or, according to Busolt, a commercial nobility (see ). In the sense of “worker for the people” the word was used throughout the Peloponnese, with the exception of Sparta, and in many parts of Greece, for a higher magistrate. The demiurgi among other officials represent Elis and Mantineia at the treaty of peace between Athens, Argos, Elis and Mantineia in 420 B.C. (Thuc. v. 47). In the (q.v.) the name is given to ten elective officers who presided over the assembly, and Corinth sent “Epidemiurgi” every year to Potidaea, officials who apparently answered to the Spartan harmosts. In Plato δημιουργÏŒς is the name given to the “creator of the world” (Timaeus, 40) and the word was so adopted by the Gnostics (see ).

DEMMIN, a town of Germany, kingdom of Prussia, on the navigable river Peene (which in the immediate neighbourhood receives the Trebel and the Tollense), 72 m. W.N.W. of Stettin, on the Berlin-Stralsund railway. Pop. (1905) 12,541. It has manufactures of textiles, besides breweries, distilleries and tanneries, and an active trade in corn and timber....