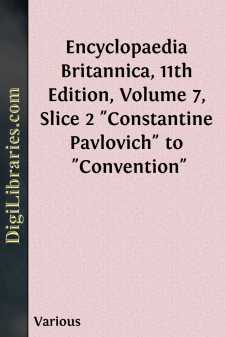 CONSTANTINE PAVLOVICH (1779-1831), grand-duke and cesarevich of Russia, was born at Tsarskoye Selo on the 27th of April 1779. Of the sons born to the unfortunate tsar Paul Petrovich and his wife Maria Feodorovna, née princess of Württemberg, none more closely resembled his father in bodily and mental characteristics than did the second, Constantine Pavlovich. The direction of the boy’s upbringing was entirely in the hands of his grandmother, the empress Catherine II. As in the case of her eldest grandson (afterwards the emperor Alexander I.), she regulated every detail of his physical and mental education; but in accordance with her usual custom she left the carrying out of her views to the men who were in her confidence. Count Nicolai Ivanovich Soltikov was supposed to be the actual tutor, but he too in his turn transferred the burden to another, only interfering personally on quite exceptional occasions, and exercised neither a positive nor a negative influence upon the character of the exceedingly passionate, restless and headstrong boy. The only person who really took him in hand was César La Harpe, who was tutor-in-chief from 1783 to May 1795 and educated both the empress’s grandsons.

Like Alexander, Constantine was married by Catherine when not yet seventeen years of age, a raw and immature boy, and he made his wife, Juliana of Coburg, intensely miserable. After a first separation in the year 1799, she went back permanently to her German home in 1801, the victim of a frivolous intrigue, in the guilt of which she was herself involved. An attempt made by Constantine in 1814 to win her back to his hearth and home broke down on her firm opposition. During the time of this tragic marriage Constantine’s first campaign took place under the leadership of the great Suvorov. The battle of Bassignano was lost by Constantine’s fault, but at Novi he distinguished himself by such personal bravery that the emperor Paul bestowed on him the title of cesarevich, which according to the fundamental law of the constitution belonged only to the heir to the throne. Though it cannot be proved that this action of the tsar denoted any far-reaching plan, it yet shows that Paul already distrusted the grand-duke Alexander. However that may be, it is certain that Constantine never tried to secure the throne. After his father’s death he led a wild and disorderly bachelor life. He abstained from politics, but remained faithful to his military inclinations, though, indeed, without manifesting anything more than a preference for the externalities of the service.

In command of the guards during the campaign of 1805 Constantine had a share of the responsibility for the unfortunate turn which events took at the battle of Austerlitz; while in 1807 neither his skill nor his fortune in war showed any improvement. However, after the peace of Tilsit he became an ardent admirer of the great Corsican and an upholder of the Russo-French alliance. It was on this account that in political questions he did not enjoy the confidence of his imperial brother. To the latter the French alliance had always been merely a means to an end, and after he had satisfied himself at Erfurt, and later during the Franco-Austrian War of 1809, that Napoleon likewise regarded his relation to Russia only from the point of view of political advantage, he became convinced that the alliance must transform itself into a battle of life and death. Such insight was never attained by Constantine; even in 1812, after the fall of Moscow, he pressed for a speedy conclusion of peace with Napoleon, and, like field-marshal Kutusov, he too opposed the policy which carried the war across the Russian frontier to a victorious conclusion upon French soil. During the campaign he was a boon companion of every commanding-officer. Barclay de Tolly was twice obliged to send him away from the army. His share in the battles in Germany and France was insignificant. At Dresden, on the 26th of August, his military knowledge failed him at the decisive moment, but at La Fère-Champenoise he distinguished himself by personal bravery. On the whole he cut no great figure. In Paris the grand-duke excited public ridicule by the manifestation of his petty military fads....