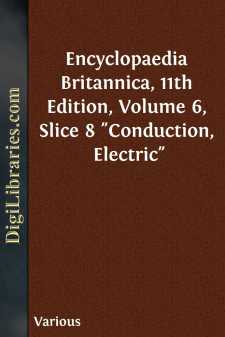 CONDUCTION, ELECTRIC. The electric conductivity of a substance is that property in virtue of which all its parts come spontaneously to the same electric potential if the substance is kept free from the operation of electric force. Accordingly, the reciprocal quality, electric resistivity, may be defined as a quality of a substance in virtue of which a difference of potential can exist between different portions of the body when these are in contact with some constant source of electromotive force, in such a manner as to form part of an electric circuit.

All material substances possess in some degree, large or small, electric conductivity, and may for the sake of convenience be broadly divided into five classes in this respect. Between these, however, there is no sharply-marked dividing line, and the classification must therefore be accepted as a more or less arbitrary one. These divisions are: (1) metallic conductors, (2) non-metallic conductors, (3) dielectric conductors, (4) electrolytic conductors, (5) gaseous conductors. The first class comprises all metallic substances, and those mixtures or combinations of metallic substances known as alloys. The second includes such non-metallic bodies as carbon, silicon, many of the oxides and peroxides of the metals, and probably also some oxides of the non-metals, sulphides and selenides. Many of these substances, for instance carbon and silicon, are well-known to have the property of existing in several allotropic forms, and in some of these conditions, so far from being fairly good conductors, they may be almost perfect non-conductors. An example of this is seen in the case of carbon in its three allotropic conditions—charcoal, graphite and diamond. As charcoal it possesses a fairly well-marked but not very high conductivity in comparison with metals; as graphite, a conductivity about one-four-hundredth of that of iron; but as diamond so little conductivity that the substance is included amongst insulators or non-conductors. The third class includes those substances which are generally called insulators or non-conductors, but which are better denominated dielectric conductors; it comprises such solid substances as mica, ebonite, shellac, india-rubber, gutta-percha, paraffin, and a large number of liquids, chiefly hydrocarbons. These substances differ greatly in insulating power, and according as the conductivity is more or less marked, they are spoken of as bad or good insulators. Amongst the latter many of the liquid gases hold a high position. Thus, liquid oxygen and liquid air have been shown by Sir James Dewar to be almost perfect non-conductors of electricity.

The behaviour of substances which fall into these three classes is discussed below in section I., dealing with metallic conduction.