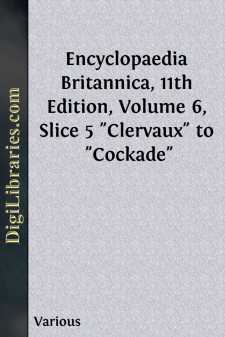 CLERVAUX (clara vallis), a town in the northern province of Oesling, grand-duchy of Luxemburg, on the Clerf, a tributary of the Sûre. Pop. (1905) 866. In old days it was the fief of the de Lannoy family, and the present proprietor is the bearer of a name not less well known in Belgian history, the count de Berlaymont. The old castle of the de Lannoys exists, and might easily be restored, but its condition is now neglected and dilapidated. In 1798 the people of Clervaux specially distinguished themselves against the French in an attempt to resist the institution of the conscription. The survivors of what was called the Kloppel-krieg (the “cudgel war”) were shot, and a fine monument commemorates the heroism of the men of Clervaux.

CLETUS, formerly regarded as the name of one of the early successors of St Peter in the see of Rome, or, according to Epiphanius and Rufinus, as sharing the direction of the Roman Church with Linus during Peter’s lifetime. He has been identified beyond doubt with Anencletus (q.v.). See Père Colombier, in Rev. des questions hist. Ap. 1st, 1876, p. 413.

CLEVEDON, a watering-place in the northern parliamentary division of Somersetshire, England, on the Bristol Channel, 15½ m. W. of Bristol on a branch of the Great Western railway. Pop. of urban district (1901) 5900. The cruciform church of St Andrew has Norman and later portions; it is the burial-place of Henry Hallam the historian, and members of his family, including his sons Arthur and Henry. Clevedon Court is a remarkable medieval mansion, dating originally from the early part of the 14th century, though much altered in the Elizabethan and other periods. The house is considered to be the original of “Castlewood” in Thackeray’s Esmond; the novelist was acquainted with the place through his friendship with the Rev. William Brookfield and his wife, the daughter of Sir Charles Elton of Clevedon Court.

CLEVELAND, BARBARA VILLIERS, Duchess of (1641-1709), mistress of the English king Charles II., was the daughter of William Villiers, 2nd Viscount Grandison (d. 1643), by his wife Mary (d. 1684), daughter of Paul, 1st Viscount Bayning. In April 1659 Barbara married Roger Palmer, who was created earl of Castlemaine two years later, and soon after this marriage her intimacy with Charles II. began. The king was probably the father of her first child, Anne, born in February 1661, although the paternity was also attributed to one of her earliest lovers, Philip Stanhope, 2nd earl of Chesterfield (1633-1713). Mistress Palmer, as Barbara was called before her husband was made an earl, was naturally much disliked by Charles’s queen, Catherine of Braganza, but owing to the insistence of the king she was made a lady of the bedchamber to Catherine, and began to mix in the political intrigues of the time, showing an especial hatred towards Edward Hyde, earl of Clarendon, who reciprocated this feeling and forbad his wife to visit her. Her house became a rendezvous for the enemies of the minister, and according to Pepys she exhibited a wild paroxysm of delight when she heard of Clarendon’s fall from power in 1667....