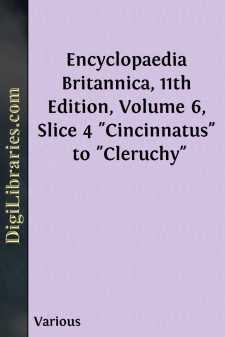 CINCINNATUS, LUCIUS QUINCTIUS, (b. c. 519 B.C.), one of the heroes of early Rome, a model of old Roman virtue and simplicity. A persistent opponent of the plebeians, he resisted the proposal of Terentilius Arsa (or Harsa) to draw up a code of written laws applicable equally to patricians and plebeians. He was in humble circumstances, and lived and worked on his own small farm. The story that he became impoverished by paying a fine incurred by his son Caeso is an attempt to explain the needy position of so distinguished a man. Twice he was called from the plough to the dictatorship of Rome in 458 and 439. In 458 he defeated the Aequians in a single day, and after entering Rome in triumph with large spoils returned to his farm. The story of his success, related five times under five different years, possibly rests on an historical basis, but the account given in Livy of the achievements of the Roman army is obviously incredible.

CINDERELLA (i.e. little cinder girl), the heroine of an almost universal fairy-tale. Its essential features are (1) the persecuted maiden whose youth and beauty bring upon her the jealousy of her step-mother and sisters, (2) the intervention of a fairy or other supernatural instrument on her behalf, (3) the prince who falls in love with and marries her. In the English version, a translation of Perrault’s Cendrillon, the glass slipper which she drops on the palace stairs is due to a mistranslation of pantoufle en vair (a fur slipper), mistaken for en verre. It has been suggested that the story originated in a nature-myth, Cinderella being the dawn, oppressed by the night-clouds (cruel relatives) and finally rescued by the sun (prince).

CINEAS, a Thessalian, the chief adviser of Pyrrhus, king of Epirus. He studied oratory in Athens, and was regarded as the most eloquent man of his age. He tried to dissuade Pyrrhus from invading Italy, and after the defeat of the Romans at Heraclea (280 B.C.) was sent to Rome to discuss terms of peace. These terms, which are said by Appian (De Rebus Samniticis, 10, 11) to have included the freedom of the Greeks in Italy and the restoration to the Bruttians, Apulians and Samnites of all that had been taken from them, were rejected chiefly through the vehement and patriotic speech of the aged Appius Claudius Caecus the censor. The withdrawal of Pyrrhus from Italy was demanded, and Cineas returned to his master with the report that Rome was a temple and its senate an assembly of kings. Two years later Cineas was sent to renew negotiations with Rome on easier terms....