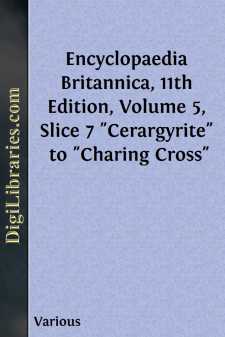 CERARGYRITE, a mineral species consisting of silver chloride; an important ore of silver. The name cerargyrite is a Greek form (from κÎ­ρας, horn, and á¼„ργυρος, silver) of the older name hornsilver, which was used by K. Gesner as far back as 1565. The chloro-bromide and bromide of silver were also included under this term until they were distinguished chemically in 1841 and 1842, and described under the names embolite and bromargyrite (or bromyrite) respectively; the chloride then came to be distinguished as chlorargyrite, though the name cerargyrite is often now applied to this alone. Chloro-bromo-iodide of silver has also been recognized as a mineral and called iodembolite. All these are strikingly alike in appearance and general characters, differing essentially only in chemical composition, and it would seem better to reserve the name cerargyrite for the whole group, using the names chlorargyrite (AgCl), embolite (Ag(Cl, Bl)), bromargyrite (AgBr) and iodembolite (Ag(Cl, Br, I)) for the different isomorphous members of the group. They are cubic in crystallization, with the cube and the octahedron as prominent forms, but crystals are small and usually indistinct; there is no cleavage. They are soft (H = 2½) and sectile to a high degree, being readily cut with a knife like horn. With their resinous to adamantine lustre and their translucency they also present somewhat the appearance of horn; hence the name hornsilver. The colour varies somewhat with the chemical composition, being grey or colourless in chlorargyrite, greenish-grey in embolite and bromargyrite, and greenish-yellow to orange-yellow in iodembolite. On exposure to light the colour quickly darkens. The specific gravity also varies with the composition: for the pure chloride it is 5.55, and the highest recorded for an iodembolite is 6.3.

The hornsilvers all occur under similar conditions and are often associated together; they are found in metalliferous veins with native silver and ores of silver, and are usually confined to the upper oxidized parts of the lodes. They are important ores of silver (the pure chloride contains 75.3% of silver), and have been extensively mined at several places in Chile, also in Mexico, and at Broken Hill in New South Wales. The chloride and chloro-bromide have been found in several Cornish mines, but never in very large amounts.

CERBERUS, in Greek mythology, the dog who guarded the entrance to the lower world. He allowed all to enter, but seized those who attempted to escape. According to Hesiod (Theog. 311), he was a fifty-headed monster with a fearful bark, the offspring of Typhon and Echidna. He was variously represented with one, two or (usually) three heads, often with the tail of a snake or with snakes growing from his head or twined round his body. One of the tasks imposed upon Heracles was to fetch Cerberus from below to the upper world, a favourite subject of ancient vase-paintings.

CERDIC (d. 534), founder of the West Saxon kingdom, is described as an ealdorman who in 495 landed with his son Cynric in Hampshire, where he was attacked at once by the Britons....