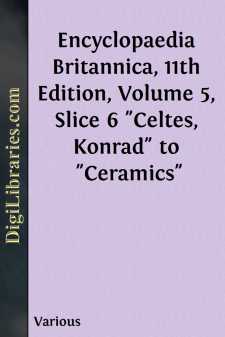 CELTES, KONRAD (1459-1508), German humanist and Latin poet, the son of a vintner named Pickel (of which Celtes is the Greek translation), was born at Wipfeld near Schweinfurt. He early ran away from home to avoid being set to his father’s trade, and at Heidelberg was lucky enough to find a generous patron in Johann von Dalberg and a teacher in Agricola. After the death of the latter (1485) Celtes led the wandering life of a scholar of the Renaissance, visiting most of the countries of the continent, teaching in various universities, and everywhere establishing learned societies on the model of the academy of Pomponius Laetus at Rome. Among these was the Sodalitas litteraria Rhenana or Celtica at Mainz (1491). In 1486 he published his first book, Ars versificandi et carminum, which created an immense sensation and gained him the honour of being crowned as the first poet laureate of Germany, the ceremony being performed by the emperor Frederick III. at the diet of Nuremberg in 1487. In 1497 he was appointed by the emperor Maximilian I. professor of poetry and rhetoric at Vienna, and in 1502 was made head of the new Collegium Poetarum et Mathematicorum, with the right of conferring the laureateship. He did much to introduce system into the methods of teaching, to purify the Latin of learned intercourse, and to further the study of the classics, especially the Greek. But he was more than a mere classicist of the Renaissance. He was keenly interested in history and topography, especially in that of his native country. It was he who first unearthed (in the convent of St Emmeran at Regensburg) the remarkable Latin poems of the nun Hrosvitha of Gandersheim, of which he published an edition (Nuremberg, 1501), the historical poem Ligurinus sive de rebus gestis Frederici primi imperatoris libri x. (Augsburg, 1507), and the celebrated map of the Roman empire known as the Tabula Peutingeriana (after Konrad Peutinger, to whom he left it). He projected a great work on Germany; but of this only the Germania generalis and an historical work in prose, De origine, situ, moribus et institutis Nurimbergae libettus, saw the light. As a writer of Latin verse Celtes far surpassed any of his predecessors. He composed odes, elegies, epigrams, dramatic pieces and an unfinished epic, the Theodoriceis. His epigrams, edited by Hartfelder, were published at Berlin in 1881. His editions of the classics are now, of course, out of date. He died at Vienna on the 4th of February 1508.

CELTIBERIA, a term used by Greek and Roman writers to denote, sometimes the whole north-east of Spain, and sometimes the north-east part of the central plateau of the peninsula. The latter was probably the correct use. The Celtiberi, in this narrower sense, were not so much one tribe as a group of cantons—Arevaci, Pelendones, Berones and four or five others....