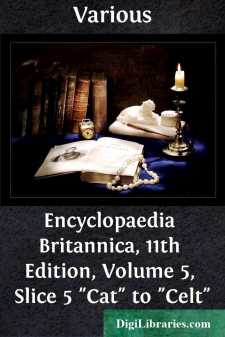 CAT, properly the name of the well-known domesticated feline animal usually termed by naturalists Felis domestica, but in a wider sense employed to denote all the more typical members of the family Felidae. According to the New English Dictionary, although the origin of the word “cat” is unknown, yet the name is found in various languages as far back as they can be traced. In old Western Germanic it occurs, for instance, so early as from a.d. 400 to 450; in old High German it is Åchazza or catero, and in Middle German kattaro. Both in Gaelic and in old French it is cat, although sometimes taking the form of chater in the latter; the Gaelic designation of the European wild cat being cat fiadhaich. In Welsh and Cornish the name is cath. If Martial’s cattae refer to this animal, the earliest Latin use of the name dates from the 1st century of our era. In the work of Palladius on agriculture, dating from about the year a.d. 350, reference is made to an animal called catus or cattus, as being useful in granaries for catching mice. This usage, coupled with the existence of a distinct term in Gaelic for the wild species, leaves little doubt that the word “cat” properly denotes only the domesticated species. This is confirmed by the employment in Byzantine Greek of the term κÎ¬ττος or κÎ¬ττα to designate domesticated cats brought from Egypt. It should be added that the αá¼´λουρος of the Greeks, frequently translated by the older writers as “cat,” really refers to the marten-cat, which appears to have been partially domesticated by the ancients and employed for mousing.

As regards the origin of the domesticated cats of western Europe, it is well known that the ancient Egyptians were in the habit of domesticating (at least in some degree) the Egyptian race of the African wild cat (Felis ocreata maniculata), and also of embalming its remains, of which vast numbers have been found in tombs at Beni Hasan and elsewhere in Egypt. These Egyptian cats are generally believed by naturalists to have had a large share in the parentage of the European breeds, which have, however, in many cases been crossed to a greater or less extent with the European wild cat (F. catus).

One of the features by which the Egyptian differs from the European wild cat is the longer and less bushy tail; and it has been very generally considered that the same feature is characteristic of European domesticated cats. According, however, to Dr E. Hamilton, “the measurement of a number of tails of the [European] wild cat and of the domestic cat gives a range between 11 in. and 14½ in., the longer length being quite as often found in the wild cats as in the domestic. The bushy appearance depends entirely on the length of the fur, and accords with the thick fur of the rest of the body of the wild cat, while in the domestic race the fur both on the body and tail is thinner and softer.”

More importance was attached by Dr A. Nehring of Berlin (SB. Ges. Naturfor., Berlin, 1887) to the colour of the soles of the hind-feet as a means of determining the relationship of the domesticated cat of Europe. According to his observations, in the Egyptian wild cat the pads of the toes are wholly black, while the black extends back either continuously or in long stripes as far as the calcaneum or heel-bone. In the European wild cat, on the other hand, the black is limited to a small round spot on the pads, while the colour of the hair as far back as the heel-bone is yellowish or yellowish-grey. Since in all domesticated cats retaining the colouring of the wild species the soles of the hind-feet correspond in this particular with the Egyptian rather than with the European wild cat, the presumption is in favour of their descent from the former rather than from the latter.

Later, Dr Nehring (op. cit. 1889) came to the conclusion that the domesticated cat has a dual parentage, one stock coming from south-eastern Asia and the other from north-eastern Africa; in other words, from a domesticated Chinese cat (itself derived from a wild Chinese species) on the one hand, and from the Egyptian cat on the other. The ordinary domesticated cats of Europe are, however, mainly of African origin, although they have largely crossed, especially in Germany (and probably also in Great Britain), with the wild cat. The same author was likewise of opinion that the domestication or taming of various species of wild cats took place chiefly among nationalities of stationary or non-nomadic habits who occupied themselves with agricultural pursuits, since it would be of vital importance that their stores of grain should be adequately protected from the depredations of rats and mice....