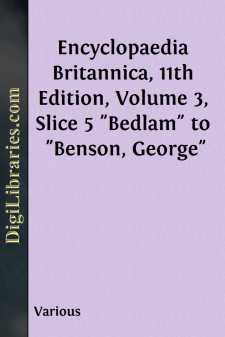 BEDLAM, or Bethlehem Hospital, the first English lunatic asylum, originally founded by Simon FitzMary, sheriff of London, in 1247, as a priory for the sisters and brethren of the order of the Star of Bethlehem. It had as one of its special objects the housing and entertainment of the bishop and canons of St Mary of Bethlehem, the mother-church, on their visits to England. Its first site was in Bishopsgate Street. It is not certain when lunatics were first received in Bedlam, but it is mentioned as a hospital in 1330 and some were there in 1403. In 1547 it was handed over by Henry VIII. with all its revenues to the city of London as a hospital for lunatics. With the exception of one such asylum in Granada, Spain, the Bethlehem Hospital was the first in Europe. It became famous and afterwards infamous for the brutal ill-treatment meted out to the insane (see : Hospital Treatment). In 1675 it was removed to new buildings in Moorfields and finally to its present site in St George’s Fields, Lambeth. The word “Bedlam” has long been used generically for all lunatic asylums.

BEDLINGTON, an urban district of Northumberland, England, within the parliamentary borough of Morpeth, 5 m. S.E. of that town on a branch of the North Eastern railway. Pop. (1901) 18,766. It lies on high ground above the river Blyth, 2? m. above its mouth. The church of St Cuthbert shows good transitional Norman details. Its dedication recalls the transportation of the body of the saintly bishop of Lindisfarne from its shrine at Durham by the monks of that foundation to Lindisfarne, when in fear of attack from William the Conqueror. They rested here with the coffin. The modern growth of the town is attributable to the valuable collieries of the neighbourhood, and to manufactures of nails and chains. It is one of the most populous mining centres in the county. On the south bank of the river is the township and urban district of Cowpen (pop. 17,879), with collieries and glass works; coal is shipped from this point by river.

Bedlington (Betlingtun) and the hamlets belonging to it were bought by Cutheard, bishop of Durham, between 900 and 915, and although locally situated in the county of Northumberland became part of the county palatine of Durham over which Bishop Walcher was granted royal rights by William the Conqueror. When these rights were taken from Cuthbert Tunstall, bishop of Durham, in 1536, Bedlington among his other property lost its special privileges, but was confirmed to him in 1541 with the other property of his predecessors. Together with the other lands of the see of Durham, Bedlington was made over to the ecclesiastical commissioners in 1866. Bedlingtonshire was made part of Northumberland for civil purposes by acts of parliament in 1832 and 1844.

BEDLOE, WILLIAM (1650-1680), English informer, was born at Chepstow on the 20th of April 1650. He appears to have been well educated; he was certainly clever, and after coming to London in 1670 he became acquainted with some Jesuits and was occasionally employed by them....