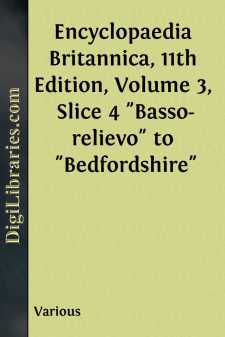 BASSO-RELIEVO (Ital. for “low relief”), the term applied to sculpture in which the design projects but slightly from the plane of the background. The relief may not project at all from the original surface of the material, as in the sunken reliefs of the Egyptians, and may be nearly flat, as in the Panathenaic procession of the Parthenon. In the early 19th century the term basso-relievo, or “low relief,” came to be employed loosely for all forms of relief, the term mezzo-relievo having already dropped out of general use owing to the difficulty of accurate application.

BASS ROCK, THE, a small island in the Firth of Forth, about 2 m. from Canty Bay, Haddingtonshire, Scotland. It is circular in shape, measuring a mile in circumference, and is 350 ft. high. On three sides the cliffs are precipitous, but they shelve towards the S.W., where landing is effected. The Bass Rock is an intrusive mass of phonolitic trachyte or orthophyre. No nepheline has been detected in the rock, but analcite is present in small quantity together with abundant orthoclase and green soda-augite. It bears a close resemblance to the eruptive masses of North Berwick Law and Traprain Law, but is non-porphyritic. It is regarded by Sir A. Geikie as a plug filling an old volcanic vent, from which lava emanated during the Calciferous Sandstone period. It used to be grazed by sheep, of which the mutton was thought to be unusually good, but its principal denizens are sea-birds, chiefly solan geese, which haunt the rock in vast numbers. A lighthouse with a six-flash lantern of 39,000 candle power was opened in 1002. For a considerable distance E. and W. there runs through the rock a tunnel, about 15 ft. high, accessible at low water. St Baldred, whose name has been given to several of the cliffs on the shore of the mainland, occupied a hermitage on the Bass, where he died in 756. In the 14th century the island became the property of the Lauders, called afterwards Lauders of the Bass, from whom it was purchased in 1671 by government, and a castle with dungeons was erected on it, in which many Covenanters were imprisoned. Among them were Alexander Peden (1626-1686), for four years, and John Blackadder (1615-1686), who died there after five years’ detention. At the Revolution four young Jacobites captured the Rock, and having been reinforced by a few others, held it for King James from June 1691 to April 1694, only surrendering when threatened by starvation. Thus the island was the last place in Great Britain to submit to William III. Dismantled of its fortifications in 1701, the Bass passed into the ownership of Sir Hew Dalrymple, to whose family it belongs. It is let on annual rental for the feathers, eggs, oil and young of the sea-birds and for the fees of visitors, who reach it usually from Canty Bay and North Berwick.

BASSUS, AUFIDIUS, a Roman historian, who lived in the reign of Tiberius. His work, which probably began with the civil wars or the death of Caesar, was continued by the elder Pliny, who, as he himself tells us, carried it down at least as far as the end of Nero’s reign....