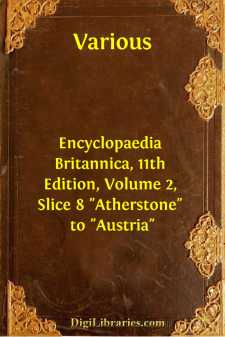 ATHERSTONE, WILLIAM GUYBON (1813-1898), British geologist, one of the pioneers in South African geology, was born in 1813, in the district of Uitenhage, Cape Colony. Having qualified as M.D. he settled in early life as a medical practitioner at Grahamstown, subsequently becoming F.R.C.S. In 1839 his interest was aroused in geology, and from that date he “devoted the leisure of a long and successful medical practice” to the pursuit of geological science. In 1857 he published an account of the rocks and fossils of Uitenhage (the latter described more fully by R. Tate, Quart. Journal Geol. Soc., 1867). He also obtained many fossil reptilia from the Karroo beds, and presented specimens to the British Museum. These were described by Sir Richard Owen. Atherstone’s identification in 1867 as a diamond of a crystal found at De Kalk near the junction of the Riet and Vaal rivers, led indirectly to the establishment of the great diamond industry of South Africa. He encouraged the workings at Jagersfontein, and he also called attention to the diamantiferous neck at Kimberley. He was one of the founders of the Geological Society of South Africa at Johannesburg in 1895; and for some years previously he was a member of the Cape parliament. He died at Grahamstown, on the 26th of June 1898.

ATHERSTONE, a market-town in the Nuneaton parliamentary division of Warwickshire, England, 102½ m. N.W. from London by the London & North-Western railway. Pop. (1901) 5248. It lies in the upper valley of the Anker, under well-wooded hills to the west, and is on the Roman Watling Street, and the Coventry canal. The once monastic church of St Mary is rebuilt, excepting the central tower and part of the chancel. The chief industry is hat-making. On the high ground to the west lie ruins of the Cistercian abbey of Merevale, founded in 1149; they include the gatehouse chapel, part of the refectory and other remains exhibiting beautiful details of the 14th century. Coal is worked at Baxterley, 3 m. west of Atherstone.

Atherstone (Aderestone, Edridestone, Edrichestone), though not mentioned in any pre-Conquest record, is of unquestionably ancient origin. A Saxon barrow was opened near the town in 1824. It is traversed by Watling Street, and portions of the ancient Roman road have been discovered in modern times. Atherstone is mentioned in Domesday among the possessions of Countess Godiva, the widow of Leofric. In the reign of Henry III. it passed to the monks of Bec in Normandy, who in 1246 obtained the grant of an annual fair at the feast of the Nativity of the Virgin, and the next year of a market every Tuesday. This market became so much frequented that in 1319 a toll was levied upon all goods coming into the town, in order to defray the cost of the repair to the roads necessitated by the constant traffic, and in 1332 a similar toll was levied on all goods passing over the bridge called Feldenbrigge near Atherstone. The September fair and Tuesday markets are still continued....