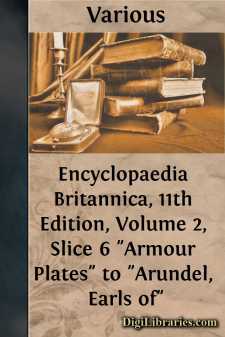 ARMOUR PLATES. The earliest recorded proposal to employ armour for ships of war (for body armour, &c., see ) appears to have been made in England by Sir William Congreve in 1805. In The Times of the 20th Defence for ships. of February of that year reference is made to Congreve’s designs for an armoured, floating mortar battery which the inventor considered would be proof against artillery fire. Among Congreve’s unpublished papers there is also a suggestion for armour-plating the embrasures of casemates. Nothing, however, seems to have come of these proposals, and a similar lack of appreciation befell the next advocate of armour, John Stevens of New Jersey, U.S.A., who submitted the plans of an armoured vessel to Congress in 1812. The Stevens family, however, continued to work at the subject, and by 1841 had determined by actual experiment the thickness of wrought-iron armour which was proof against the projectiles then in use. The necessity for armouring ships as a protection against shell fire was again History. pointed out by General Paixhans in 1841, and in 1845 Dupuy de Lôme had prepared the designs of an armoured frigate for the French government. During the period between 1827 and 1854, experiments in connexion with the proposed application of armour to both ships and forts were carried out in England, the United States and France, but the question did not get beyond the experimental stage until the latter year, when armoured floating batteries were laid down in all three countries, probably as the immediate outcome of the destruction of the Turkish fleet by shell fire at Sinope on the 30th of November 1853.

Three of the French floating batteries were in action at the bombardment of Kinburn in 1855, where they achieved a conspicuous success, silencing the Russian forts after a four hours’ engagement, during which they themselves, although frequently struck, were practically uninjured, their loss in personnel being but trifling. To quote Very: “This comparatively insignificant action, which had little if any effect upon the course of the Crimean War, changed the whole condition of armour for naval use from one of speculation to one of actual and constant necessity.” The military application of armour for the protection of guns mounted in permanent fortifications followed. Its development, however, took rather a different course, and the question of armour generally is of less importance for the military engineer than for the naval constructor. For the employment of armour in ship construction and in permanent works on land, see the articles ; ; the present article is concerned solely with the actual armour itself.

The earliest armour, both for ships and forts, was made of wrought iron, and was disposed either in a single thickness or in successive layers sandwiched with wood or concrete. Such armour is now wholly obsolete, though examples Construction and testing. of it may still be found in a few forts of early date....