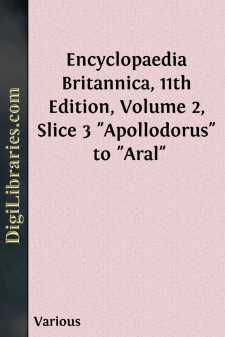 APOLLODORUS, an Athenian painter, who flourished at the end of the 5th century B.C. He is said to have introduced great improvements in perspective and chiaroscuro. What these were it is impossible to say: perspective cannot have been in his day at an advanced stage. Among his works were an Odysseus, a priest in prayer, and an Ajax struck by lightning.

APOLLODORUS, an Athenian grammarian, pupil of Aristarchus and Panaetius the Stoic, who lived about 140 B.C. He was a prolific and versatile writer. There is extant under his name a treatise on the gods and the heroic age, entitled Βιβλιοθá¼ κη, a valuable authority on ancient mythology. Modern critics are of opinion that, if genuine, it is an abridgment of a larger work by him (Περá½¶ θεá¿¶ν).

Edition, with commentary, by Heyne (1803); text by Wagner (1894) (Mythographi Graeci, vol. i. Teubner series). Amongst other works by him of which only fragments remain, collected in Müller, Fragmenta Historicorum Graecorum, may be mentioned: ΧρονικÎ¬, a universal history from the fall of Troy to 144 B.C.; ΠεριÎ®γησις, a gazetteer written in iambics; Περá½¶ Νεá¿¶ν, a work on the Homeric catalogue of ships; and a work on etymology (ÎˆτυμολογÎ¯αι).

APOLLODORUS, of Carystus in Euboea, one of the most important writers of the New Attic comedy, who flourished at Athens between 300 and 260 B.C. He is to be distinguished from an older Apollodorus of Gela (342-290), also a writer of comedy, a contemporary of Menander. He wrote 47 comedies and obtained the prize five times. Terence borrowed his Hecyra and Phormio from the ÎˆκυρÎ¬ and ÎˆπιδικαζÏŒμενος of Apollodorus.

APOLLODORUS, of Damascus, a famous Greek architect, who flourished during the 2nd century A.D. He was a favourite of Trajan, for whom he constructed the stone bridge over the Danube (A.D. 104-105). He also planned a gymnasium, a college, public baths, the Odeum and the Forum Trajanum, within the city of Rome; and the triumphal arches at Beneventum and Ancona. The Trajan column in the centre of the Forum is celebrated as being the first triumphal monument of the kind. On the accession of Hadrian, whom he had offended by ridiculing his performances as architect and artist, Apollodorus was banished, and, shortly afterwards, being charged with imaginary crimes, put to death (Dio Cassius lxix. 4). He also wrote a treatise on Siege Engines (ΠολιορκητικÎ¬), which was dedicated to Hadrian.

APOLLONIA, the name of more than thirty cities of antiquity. The most important are the following: (1) An Illyrian city (known as Apollonia κατá¾½ ÎˆπÎ¯δαμνον or πρá½¸ς ÎˆπιδÎ¬μνá¿³) on the right bank of the Aous, founded by the Corinthians and Corcyraeans. It soon became a place of increasing commercial prosperity, as the most convenient link between Brundusium and northern Greece, and as one of the starting-points of the Via Egnatia....