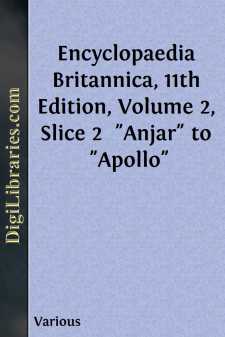 ANJAR, a fortified town of India, and the capital of a district of the same name in the native state of Cutch, in the presidency of Bombay. The country is dry and sandy, and entirely depends on well irrigation for its water supply. The town is situated nearly 10 miles from the Gulf of Cutch. It suffered severely from an earthquake in 1819, which destroyed a large number of houses, and occasioned the loss of several lives. In 1901 the population was 18,014. The town and district of Anjar were both ceded to the British in 1816, but in 1822 they were again transferred to the Cutch government in consideration of an annual money payment. Subsequently it was discovered that this obligation pressed heavily upon the resources of the native state, and in 1832 the pecuniary equivalent for Anjar, both prospectively and inclusive of the arrears which had accrued to that date, was wholly remitted by the British government.

ANJOU, the old name of a French territory, the political origin of which is traced to the ancient Gallic state of the Andes, on the lines of which was organized, after the conquest by Julius Caesar, the Roman civitas of the Andecavi. This was afterwards preserved as an administrative district under the Franks with the name first of pagus, then of comitatus, or countship of Anjou. This countship, the extent of which seems to have been practically identical with that of the ecclesiastical diocese of Angers, occupied the greater part of what is now the department of Maine-et-Loire, further embracing, to the north, Craon, Bazouges (Château-Gontier), Le Lude, and to the east, Château-la-Vallière and Bourgueil, while to the south, on the other hand, it included neither the present town of Montreuil-Bellay, nor Vihiers, Cholet, Beaupréau, nor the whole district lying to the west of the Ironne and Thouet, on the left bank of the Loire, which formed the territory of the Mauges. It was bounded on the north by the countship of Maine, on the east by that of Touraine, on the south by that of Poitiers and by the Mauges, on the west by the countship of Nantes.

From the outset of the reign of Charles the Bald, the integrity of Anjou was seriously menaced by a two-fold danger: from Brittany and from Normandy. Lambert, a former count of Nantes, after devastating Anjou in concert with Nominoé, duke of Brittany, had by the end of the year 851 succeeded in occupying all the western part as far as the Mayenne. The principality, which he thus carved out for himself, was occupied, on his death, by Erispoé, duke of Brittany; by him it was handed down to his successors, in whose hands it remained till the beginning of the 10th century. All this time the Normans had not ceased ravaging the country; a brave man was needed to defend it, and finally towards 861, Charles the Bald entrusted it to Robert the Strong (q.v.), but he unfortunately met with his death in 866 in a battle against the Normans at Brissarthe. Hugh the Abbot succeeded him in the countship of Anjou as in most of his other duties, and on his death (886) it passed to Odo (q.v.), the eldest son of Robert the Strong, who, on his accession to the throne of France (888), probably handed it over to his brother Robert....