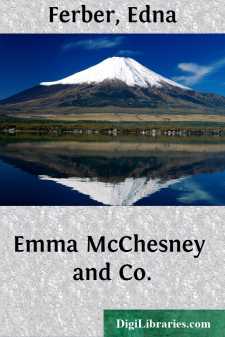 The door marked "MRS. MCCHESNEY" was closed. T. A. Buck, president of the Buck Featherloom Petticoat Company, coming gaily down the hall, stopped before it, dismayed, as one who, with a spicy bit of news at his tongue's end, is met with rebuff before the first syllable is voiced. That closed door meant: "Busy. Keep out."

"She'll be reading a letter," T. A. Buck told himself grimly. Then he turned the knob and entered his partner's office.

Mrs. Emma McChesney was reading a letter. More than that, she was poring over it so that, at the interruption, she glanced up in a maddeningly half-cocked manner which conveyed the impression that, while her physical eye beheld the intruder, her mental eye was still on the letter.

Emma McChesney put down the letter and smiled.

"Sit down—now that you're in. And if you expect me to say, 'Knew what?' you're doomed to disappointment."

T. A. Buck remained standing, both gloved hands clasping his walking stick on which he leaned.

"Every time I come into this office, you're reading the latest scrawl from your son. One would think Jock's letters were deathless masterpieces. I believe you read them at half-hour intervals all week, and on Sunday get 'em all out and play solitaire with them."

"You make me feel like a cash-girl who's been caught flirting with the elevator starter. Have I been neglecting business?"

"Business? No; you've been neglecting me!"

"It isn't that," interrupted Buck, "and you know it. Look here! That day Jock went away and we came back to the office, and you said——"

"I know I said it, T. A., but don't remind me of it. That wasn't a fair test. I had just seen Jock leave me to take his own place in the world. You know that my day began and ended with him. He was my reason for everything. When I saw him off for Chicago that day, and knew he was going there to stay, it seemed a million miles from New York. I was blue and lonely and heart-sick. If the office-boy had thrown a kind word to me I'd have broken down and wept on his shoulder."

Buck, still standing, looked down between narrowed lids at his business partner.

"Emma McChesney," he said steadily, "do you mean that?"

Mrs. McChesney, the straightforward, looked up, looked down, fiddled with the letter in her hand.

"Well—practically yes—that is—I thought, now that you're going to the mountains for a month, it might give me a chance to think—to——"

"And d'you know what I'll do meanwhile, out of revenge on the sex? I've just ordered three suits of white flannel, and I shall break every feminine heart in the camp, regardless— Oh, say, that's what I came in to tell you! Guess whom I saw at the tailor's?"

"Fat Ed Meyers. I just glimpsed him in one of the fitting-rooms. And they were draping him in white."

Emma McChesney sat up with a jerk....