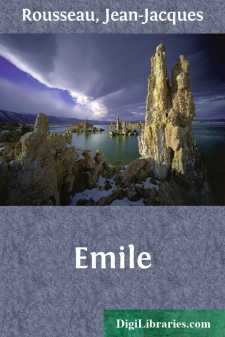 This collection of scattered thoughts and observations has little order or continuity; it was begun to give pleasure to a good mother who thinks for herself. My first idea was to write a tract a few pages long, but I was carried away by my subject, and before I knew what I was doing my tract had become a kind of book, too large indeed for the matter contained in it, but too small for the subject of which it treats. For a long time I hesitated whether to publish it or not, and I have often felt, when at work upon it, that it is one thing to publish a few pamphlets and another to write a book. After vain attempts to improve it, I have decided that it is my duty to publish it as it stands. I consider that public attention requires to be directed to this subject, and even if my own ideas are mistaken, my time will not have been wasted if I stir up others to form right ideas. A solitary who casts his writings before the public without any one to advertise them, without any party ready to defend them, one who does not even know what is thought and said about those writings, is at least free from one anxiety—if he is mistaken, no one will take his errors for gospel.

I shall say very little about the value of a good education, nor shall I stop to prove that the customary method of education is bad; this has been done again and again, and I do not wish to fill my book with things which everyone knows. I will merely state that, go as far back as you will, you will find a continual outcry against the established method, but no attempt to suggest a better. The literature and science of our day tend rather to destroy than to build up. We find fault after the manner of a master; to suggest, we must adopt another style, a style less in accordance with the pride of the philosopher. In spite of all those books, whose only aim, so they say, is public utility, the most useful of all arts, the art of training men, is still neglected. Even after Locke's book was written the subject remained almost untouched, and I fear that my book will leave it pretty much as it found it.

We know nothing of childhood; and with our mistaken notions the further we advance the further we go astray. The wisest writers devote themselves to what a man ought to know, without asking what a child is capable of learning. They are always looking for the man in the child, without considering what he is before he becomes a man. It is to this study that I have chiefly devoted myself, so that if my method is fanciful and unsound, my observations may still be of service. I may be greatly mistaken as to what ought to be done, but I think I have clearly perceived the material which is to be worked upon. Begin thus by making a more careful study of your scholars, for it is clear that you know nothing about them; yet if you read this book with that end in view, I think you will find that it is not entirely useless.

With regard to what will be called the systematic portion of the book, which is nothing more than the course of nature, it is here that the reader will probably go wrong, and no doubt I shall be attacked on this side, and perhaps my critics may be right. You will tell me, "This is not so much a treatise on education as the visions of a dreamer with regard to education." What can I do? I have not written about other people's ideas of education, but about my own. My thoughts are not those of others; this reproach has been brought against me again and again. But is it within my power to furnish myself with other eyes, or to adopt other ideas? It is within my power to refuse to be wedded to my own opinions and to refuse to think myself wiser than others. I cannot change my mind; I can distrust myself. This is all I can do, and this I have done. If I sometimes adopt a confident tone, it is not to impress the reader, it is to make my meaning plain to him. Why should I profess to suggest as doubtful that which is not a matter of doubt to myself? I say just what I think.

When I freely express my opinion, I have so little idea of claiming authority that I always give my reasons, so that you may weigh and judge them for yourselves; but though I would not obstinately defend my ideas, I think it my duty to put them forward; for the principles with regard to which I differ from other writers are not matters of indifference; we must know whether they are true or false, for on them depends the happiness or the misery of mankind....