Emergency Childbirth A Reference Guide for Students of the Medical Self-help Training Course, Lesson No. 11 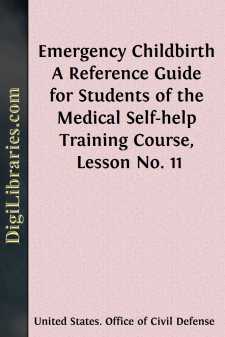 The mother will need a clean surface to lie on. Her bed should be so arranged that the mattress is well protected by waterproof sheeting or pads made from several thicknesses of paper covered with cloth. Cover these protective materials with a regular bedsheet.

A warm bed should be made ready in advance for the baby. It may be a clothes basket, a box lined with a blanket, or a bureau drawer placed on firm chairs or on a table. If possible, warm the baby's blanket, shirt, and diapers with a hot water bottle. Warm bricks or a bag of table salt that has been heated can be used if a hot water bottle is not available.

A knife, a pair of scissors, or a razor should be thoroughly cleansed and sterilized in preparation for cutting the umbilical cord. If there is no way to boil water to sterilize them (the preferred method of sterilization), sterilize them by submersion in 70 percent isopropyl alcohol solution for at least 20 minutes or up to 3 hours, if possible. Sterile tapes for tying the umbilical cord will be needed. (Do not remove them from their sterile wrappings until you are ready to use them.) If no tapes are available, a clean shoestring or a strip of sheeting (folded into a narrow tie) can be boiled and used wet as a cord tie substitute.

Labor is the term used to describe the process of childbirth. It consists of the contractions of the wall of the womb (uterus) which force the baby and, later, the afterbirth (placenta) into the outside world. Labor is divided into three stages. Its duration varies greatly in different persons and under different circumstances.

During the first and longest stage, the small opening at the lower end of the womb gradually stretches until it is large enough to let the baby pass through. The contractions (tightening) of the uterus, which bring about this stretching and move the baby along into the birth canal, cause pains known as labor pains.

These pains, usually beginning as an aching sensation in the small of the back, turn in a short time into regularly recurring cramplike pains in the lower abdomen. By placing your hand on the mother's abdomen just above the navel, you can feel each tightening of the uterus as an increasing firmness or hardness. It lasts for 30 to 60 seconds. The pains disappear each time the uterus relaxes.

At first these pains occur from 10 to 20 minutes apart and are not very severe. They may even stop completely for a while and then start up again. The mother should rest when she is tired but need not be lying down continuously. She may sleep between tightenings if she can. She can take a little water or perhaps tea during the entire labor process. She should urinate frequently during labor so the bladder will be as empty as possible at the time of birth....