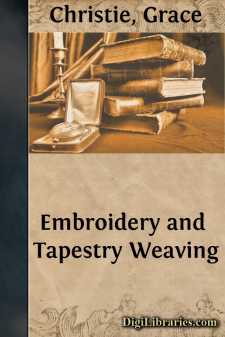 Needlework, which is still practised traditionally in every house, was once a splendid art, an art in which English workers were especially famous, so that, early in the XIIIth century, vestments embroidered in England were eagerly accepted in Rome, and the kind of work wrought here was known over Europe as "English Work." Embroideries façon d'Angleterre often occupy the first place in foreign inventories.

At Durham are preserved some beautiful fragments of embroidery worked in the Xth century, and many examples, belonging to the great period of the XIIIth and XIVth centuries, are preserved at the South Kensington Museum, which is particularly rich in specimens of this art. In order to judge of what were then its possibilities it is worth while to go and see there three notable copes, the blue cope, the Sion cope, and the rose-colour Jesse-tree cope, the last two of which are certainly English, and the former probably so. The Sion cope bears a remnant of an inscription which has unfortunately been cut down and otherwise injured, so that all that I have been able to read is as follows: DAVN PERS : DE : V ...; probably the name of the donor.

In the XIIIth century the craft of embroidery was practised both by men and women.

That great art patron, Henry the Third, chiefly employed for his embroideries, says Mr. Hudson Turner, "a certain Mabel of Bury St. Edmund's, whose skill as an embroideress seems to have been remarkable, and many interesting records of her curious performances might be collected." And I have found a record of an embroidered chasuble made for the king by "Mabilia" of St. Edmund's in 1242. The most splendid piece of embroidery produced for this king must have been the altar frontal of Westminster Abbey, completed about 1269. It was silk, garnished with pearls, jewels, and translucent enamels. Four embroideresses worked on it for three years and three-quarters, and it seems to have cost a sum equal to about £3000 of our money.

"The London Broderers" did not receive a formal charter of incorporation until 1561, but they must have been a properly organised craft centuries before. In 2 Henry IV. it was reported to Parliament that divers persons of the "Craft of Brauderie" made unfit work of inferior materials, evading the search of "the Wardens of Brauderie" in the said City of London.

In Paris, in the year 1295, there were ninety-three embroiderers and embroideresses registered as belonging to the trade. The term of apprenticeship to the craft was for eight years, and no employer might take more than one apprentice at a time. In the XVIth century the Guild was at the height of its power, and embroideries were so much in demand that the Jardin des Plantes in Paris was established to furnish flower-subjects for embroidery design. It was founded by the gardener, Jean Robin, and by Pierre Vallet, "brodeur" to Henry IV. In the XVIIIth century the company numbered 250 past-masters.

To this craft the present volume forms, I believe, an admirable introduction and text-book, not only on the side of workmanship, but also on that difficult subject, "design"—difficult, that is, from its having been so much discussed in books, yet entirely simple when approached, as here, as a necessary part of workmanship. It is fortunate that we have not as yet learned to bother our cooks as to which part of their work is designing and which is merely mechanical. Of course the highest things of design, as well as of workmanship, come only after long practice and to the specially gifted, but none the less every human creature must in some sort be a designer, and it has caused immense harm to raise a cloud of what Morris called "sham technical twaddle" between the worker and what should be the spontaneous inspiration of his work....