Elsie at the World's Fair 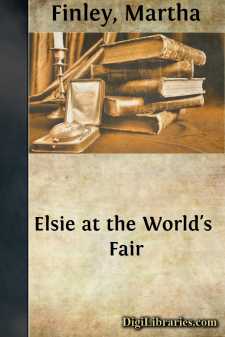 Hugh Lilburn was very urgent with his betrothed for a speedy marriage, pleading that as her brother had robbed him and his father of their expected housekeeper—his cousin Marian—he could not long do without the wife who was to supply her place. Her sisters, Isadore and Virginia, who had come up from the far South to be present at the ceremony, joined with him in his plea for haste. They wanted to see her in her own home, they said, and that without remaining too long away from theirs. Ella finally yielded to their wishes so far as to complete her preparations within a month after the home-coming from the North.

The wedding was a really brilliant affair, and followed up by parties given by the different members of the family connection; but no bridal trip was taken, neither bride nor groom caring for it, and Hugh's business requiring his presence at home.

A few weeks later Calhoun Conly went North for his bride. Some festivities followed his return; then all settled down for the winter, Harold and Herbert Travilla taking up their medical studies with Dr. Conly, and Captain Raymond's pupils resuming such of their lessons as had been dropped for the time, though the wedding festivities had been allowed to interfere but little with them, as—with the exception of Marian, now Mrs. Conly—they were considered too young to attend the parties. A matter of regret to none of them except Rosie Travilla and Lucilla Raymond, and even they, though they would have been glad to be permitted to go, made no remonstrance or complaint, but submitted cheerfully to the decision of their elders.

A busy, happy winter and spring followed, bringing no unusual event to any branch of the family.

Max was frequently heard from, his father continuing to send him daily letters, several of which would be replied to together by one from the lad—always frank, candid, and affectionate, sometimes expressing a great longing for a sight of home and the dear ones there.

After receiving such a letter the captain was very apt to pay a flying visit to the Academy, in case there were no special reasons for remaining closely at home, sometimes going alone, at others taking one or more members of the family with him; his wife, if she could make it convenient to go, or one or more of his daughters, by whom the little trip and the sight of their brother were esteemed a great reward for good conduct and perfect recitations.

Both they and the lad himself looked forward with ardent desire and joyous anticipation to the June commencement, after which would begin the one long holiday Max would have during the six years of his course at the Academy.

The holidays for the home pupils began a day or two earlier, and a merry party, including, besides the captain and his immediate family, the rest of his pupils, with Grandma Elsie, her father and his wife, boarded the Dolphin and set sail for Annapolis to attend the commencement at the Naval Academy.

The weather was delightful, and all greatly enjoyed the little trip. On their arrival they found Max well and in fine spirits. The reports of both his studies and conduct were all that could be desired, and the home friends—his father in especial—regarded him with both pride and affection, and expressed much pleasure in the fact that he was to accompany them on the return trip.

Max dearly loved his home, and during the nearly two years of his absence from it had had occasional fits of excessive homesickness; more, however, for the dear ones dwelling there than for the place. So that he was full of joy on learning that every one of the family was on board the Dolphin....