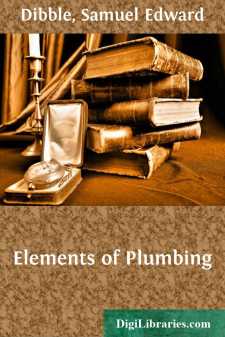 CHAPTER I Plumbing Fixtures and Trade

Modern plumbing as a trade is the arranging and running of pipes to supply pure water to buildings, the erecting of fixtures for the use of this supply, and the installing of other pipes for the resulting waste water. The work of the trade divides itself therefore into two parts: first the providing an adequate supply of water; and second, the disposing of this water after use. The first division offers few problems to the plumber, little variety in the layout being possible, and the result depending mostly upon the arrangement of the pipes and fittings; but the second division calls for careful study in the arrangement, good workmanship in the installing, and individual attention to each fixture.

The trade had its beginnings in merely supplying fresh water to a community. This was done by means of trenching, or conveying water from lakes, rivers, or springs through wooden pipes or open troughs. By easy stages the trade improved and enlarged its scope, until at the present time it is able to provide for the adequate distribution of tons of water under high pressure furnished by the city water works.

In the early years of the trade the question of the disposal of the waste water was easily answered, for it was allowed to be discharged onto the ground to seek its own course. But with the increased amount of water available, the waste-water problem has enlarged until today it plays the most important part of plumbing, and the trade has had to change to meet this waste-water problem.

The first simple system of a pipe running from the sink to a point outside the building was sufficient. As larger buildings came into use and communities were more thickly populated, the plumbing problem demanded thought and intense study. The waste pipes from fixtures had to be so arranged that it would be impossible for foul odors and germ-laden air to enter the building through a plumbing fixture. The importance of this is evidenced by the plumbing laws now in use throughout the country.

One of the first plumbing fixtures put into common use was a hollowed-out stone which served as a sink. It was with considerable interest that the writer saw a sink of this kind in actual use in the summer of 1915, at a house in a New England village. This sink had been in service for about 100 years. From this beginning the well-known fixtures of today have developed. The demand for moderate priced, sanitary closets, lavatories, and baths has led to the rapid improvement seen in plumbing fixtures. In the development of these fixtures, as soon as a bad feature was recognized the fixture was at once discarded, until now the market offers fixtures as mechanically fine as can be produced. Plumbing fixtures were at first manufactured so that it was necessary to support them on a wooden frame, and this frame was enclosed in wood. The enclosure made by this framework soon became foul and filthy and a breeding place for all kinds of disease germs and vermin. This bad feature was overcome by the introduction of open plumbing, that is, fixtures so made that the enclosure of wood could be done away with. The open plumbing allowed a free circulation of air around the fixture and exposed pipes, thereby making the outside of the fixture and its immediate surroundings free from all the bad features of the closed plumbing. Plenty of fresh air and plenty of light are necessary for good sanitary plumbing.

The materials of which the first open-plumbing fixtures were made consisted of marble, copper, zinc, slate, iron, and clay. Time soon proved that marble and slate were absorbent, copper and zinc soon leaked from wear, iron rusted, and clay cracked and lacked strength; therefore these materials soon became insanitary, and foul odors were easily detected rising from the fixture. Besides these materials being insanitary, the fact that a fixture was constructed using a number of sections proved that joints and seams were insanitary features on a fixture. For instance, in a marble lavatory constructed by using one piece for the top, another for the bowl, and still another for the back, filth accumulated at every joint and seam. Following this condition, developed the iron enameled and earthenware fixtures, constructed without seams and with a smooth, even, glossy white finish. The fact that these fixtures are made of material that is non-absorbent adds to their value as sanitary plumbing fixtures....