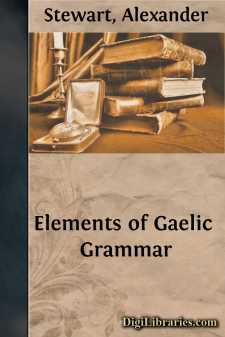 The utility of a Grammar of the Scottish Gaelic will be variously appreciated. Some will be disposed to deride the vain endeavour to restore vigour to a decaying superannuated language. Those who reckon the extirpation of the Gaelic a necessary step toward that general extension of the English which they deem essential to the political interest of the Highlands, will condemn every project which seems likely to retard its extinction. Those who consider that there are many parts of the Highlands, where the inhabitants can, at present, receive no useful knowledge whatever except through the channel of their native tongue, will probably be of opinion that the Gaelic ought at least to be tolerated. Yet these too may condemn as useless, if not ultimately detrimental, any attempt to cultivate its powers, or to prolong its existence. Others will entertain a different opinion. They will judge from experience, as well as from the nature of the case, that no measure merely of a literary kind will prevail to hinder the progress of the English language over the Highlands; while general convenience and emolument, not to mention private emulation and vanity, conspire to facilitate its introduction, and prompt the natives to its acquisition. They will perceive at the same time, that while the Gaelic continues to be the common speech of multitudes,—while the knowledge of many important facts, of many necessary arts, of morals, of religion, and of the laws of the land, can be conveyed to them only by means of this language,—it must be of material service to preserve it in such a state of cultivation and purity, as that it may be fully adequate to these valuable ends; in a word, that while it is a living language, it may answer the purpose of a living language.

To those who wish for an uniformity of speech over the whole kingdom, it may not be impertinent to suggest one remark. The more that the human mind is enlightened, the more desirous it becomes of farther acquisitions in knowledge. The only channel through which the rudiments of knowledge can be conveyed to the mind of a remote Highlander is the Gaelic language. By learning to read and to understand what he reads, in his native tongue, an appetite is generated for those stores of science which are accessible to him only through the medium of the English language. Hence an acquaintance with the English is found to be necessary for enabling him to gratify his desire after further attainments. The study of it becomes, of course, an object of importance; it is commenced, and prosecuted with increasing diligence. These premises seem to warrant a conclusion which might at first appear paradoxical, that, by cultivating the Gaelic, you effectually, though indirectly, promote the study and diffuse the knowledge of the English.

To public teachers it is of the highest moment that the medium through which their instructions are communicated be properly adapted to that use, and that they be enabled to avail themselves of it in the fittest manner....