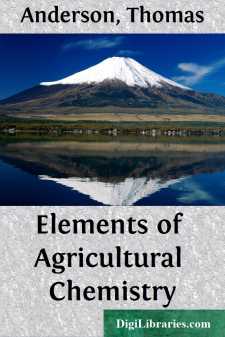 That the phenomena of vegetation are dependent on certain chemical changes occurring in the plant, by which the various elements of its food are elaborated and converted into vegetable matter, was very early recognised by chemists; and long before the correct principles of that science were established, Van Helmont maintained that plants derived their nourishment from water, while Sir Kenelm Digby, Hook, Bradley, and others, attributed an equally exclusive influence to air, and enlarged on the practical importance of the conclusions to be deduced from their views. These opinions, which were little better than hypotheses, and founded on very imperfect chemical data, are mentioned by Jethro Tull, the father of modern agriculture, only to deny their accuracy; and he contended that the plants absorb and digest the finer particles of the earth, and attributed the success of the particular system of husbandry he advocated to the comminution of the soil, by which a larger number of its particles are rendered sufficiently small to permit their ready absorption by the roots. Popular opinion at that time was in favour of the mechanical rather than the chemical explanation of agricultural facts, and Tull's work had the effect of confirming this opinion, and turning attention away from the application of chemistry to agriculture. Indeed, no good results could have followed its study at that time, for chemistry, especially in those departments bearing more immediately on agriculture, was much too imperfect, and it was only towards the close of the last century, when Lavoisier established its true principles, that it became possible to pursue it with any prospect of success.

Very soon after Lavoisier's system was made known, Lord Dundonald published his "Treatise on the Intimate Connexion between Chemistry and Agriculture," in which the important bearings of the recent chemical discoveries on the practice of agriculture were brought prominently under the notice of the farmer, and almost at the same time De Saussure commenced those remarkable researches, which extended over a long series of years, and laid the foundation of almost all our accurate knowledge of the chemistry of vegetation. Saussure traced with singular care and accuracy the whole phenomena of the life of plants, and indicated the mode in which the facts he established might be taken advantage of in improving the cultivation of the soil. But neither his researches, nor Lord Dundonald's more direct appeal to the farmer, excited the attention they deserved, or produced any immediate effect on the progress of agriculture. It was not till the year 1812 that the interest of practical men was fairly awakened by a course of lectures given by Sir Humphrey Davy, at the instance of Sir John Sinclair, who was at that time president of the Board of Agriculture. In these lectures, written with all the clearness and precision which characterised their author's style, the results of De Saussure's experiments were for the first time presented to the farmer in a form in which they could be easily understood by him, the conclusions to which they led were distinctly indicated, and a number of useful practical suggestions made, many of which have been adopted into every-day practice, and become so thoroughly incorporated with it, that their scientific origin has been altogether forgotten....