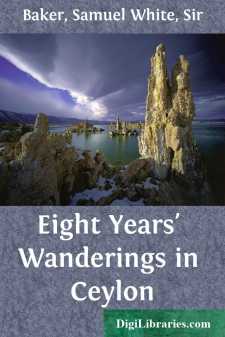 It was in the year 1845 that the spirit of wandering allured me toward Ceylon: little did I imagine at that time that I should eventually become a settler.

The descriptions of its sports, and the tales of hairbreadth escapes from elephants, which I had read in various publications, were sources of attraction against which I strove in vain; and I at length determined upon the very wild idea of spending twelve months in Ceylon jungles.

It is said that the delights of pleasures in anticipation exceed the pleasures themselves: in this case doubtless some months of great enjoyment passed in making plans of every description, until I at length arrived in Colombo, Ceylon's seaport capital.

I never experienced greater disappointment in an expectation than on my first view of Colombo. I had spent some time at Mauritius and Bourbon previous to my arrival, and I soon perceived that the far-famed Ceylon was nearly a century behind either of those small islands.

Instead of the bustling activity of the Port Louis harbor in Mauritius, there were a few vessels rolling about in the roadstead, and some forty or fifty fishing canoes hauled up on the sandy beach. There was a peculiar dullness throughout the town—a sort of something which seemed to say, "Coffee does not pay." There was a want of spirit in everything. The ill-conditioned guns upon the fort looked as though not intended to defend it; the sentinels looked parboiled; the very natives sauntered rather than walked; the very bullocks crawled along in the midday sun, listlessly dragging the native carts. Everything and everybody seemed enervated, except those frightfully active people in all countries and climates, "the custom-house officers:" these necessary plagues to society gave their usual amount of annoyance.

What struck me the most forcibly in Colombo was the want of shops. In Port Louis the wide and well-paved streets were lined with excellent "magasins" of every description; here, on the contrary, it was difficult to find anything in the shape of a shop until I was introduced to a soi-disant store, where everything was to be purchased from a needle to a crowbar, and from satin to sail-cloth; the useful predominating over the ornamental in all cases. It was all on a poor scale and after several inquiries respecting the best hotel, I located myself at that termed the Royal or Seager's Hotel. This was airy, white and clean throughout; but there was a barn-like appearance, as there is throughout most private dwellings in Colombo, which banished all idea of comfort.

A good tiffin concluded, which produced a happier state of mind, I ordered a carriage for a drive to the Cinnamon Gardens. The general style of Ceylon carriages appeared in the shape of a caricature of a hearse: this goes by the name of a palanquin carriage....