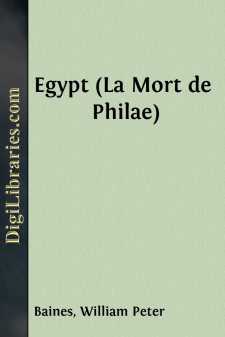 CHAPTER I A WINTER MIDNIGHT BEFORE THE GREAT SPHINX

A night wondrously clear and of a colour unknown to our climate; a place of dreamlike aspect, fraught with mystery. The moon of a bright silver, which dazzles by its shining, illumines a world which surely is no longer ours; for it resembles in nothing what may be seen in other lands. A world in which everything is suffused with rosy color beneath the stars of midnight, and where granite symbols rise up, ghostlike and motionless.

Is that a hill of sand that rises yonder? One can scarcely tell, for it has as it were no shape, no outline; rather it seems like a great rosy cloud, or some huge, trembling billow, which once perhaps raised itself there, forthwith to become motionless for ever. . . . And from out this kind of mummified wave a colossal human effigy emerges, rose-coloured too, a nameless, elusive rose; emerges, and stares with fixed eyes and smiles. It is so huge it seems unreal, as if it were a reflection cast by some mirror hidden in the moon. . . . And behind this monster face, far away in the rear, on the top of those undefined and gently undulating sandhills, three apocalyptic signs rise up against the sky, those rose-coloured triangles, regular as the figures of geometry, but so vast in the distance that they inspire you with fear. They seem to be luminous of themselves, so vividly do they stand out in their clear rose against the deep blue of the star-spangled vault. And this apparent radiation from within, by its lack of likelihood, makes them seem more awful.

And all around is the desert; a corner of the mournful kingdom of sand. Nothing else is to be seen anywhere save those three awful things that stand there upright and still—the human likeness magnified beyond all measurement, and the three geometric mountains; things at first sight like exhalations, visionary things, with nevertheless here and there, and most of all in the features of the vast mute face, subtleties of shadow which show that it at least exists, rigid and immovable, fashioned out of imperishable stone.

Even had we not known, we must soon have guessed, for these things are unique in the world, and pictures of every age have made the knowledge of them commonplace: the Sphinx and the Pyramids! But what is strange is that they should be so disquieting. . . . And this pervading colour of rose, whence comes it, seeing that usually the moon tints with blue the things it illumines? One would not expect this colour either, which, nevertheless, is that of all the sands and all the granites of Egypt and Arabia. And then too, the eyes of the statue, how often have we not seen them? And did we not know that they were capable only of their one fixed stare? Why is it then that their motionless regard surprises and chills us, even while we are obsessed by the smile of the sealed lips that seem to hold back the answer to the supreme enigma? . . .

It is cold, but cold as in our country are the fine nights of January, and a wintry mist rises low down in the little valleys of the sand....