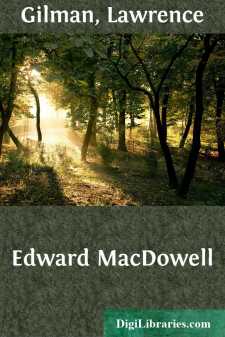 Edward MacDowell, the first Celtic voice that has spoken commandingly out of musical art, achieved that priority through natural if not inevitable processes. Both his grandfather and grandmother on his father's side were born in Ireland, of Irish-Scotch parents. To his paternal great-grandfather, Alexander MacDowell, the composer traced the Scottish element in his blood; his paternal great-grandmother, whose maiden name was Ann McMurran, was born near Belfast, Ireland. Their son, Alexander, born in Belfast, came to America early in the last century and settled in New York, where he married a countrywoman, Sarah Thompson, whom he met after his arrival in the New World. A son, Thomas (Edward's father), was born to them in New York—where, until his retirement some time ago, he was engaged in business for many years. He married in 1856 Frances M. Knapp, a young American woman of English antecedents. Five years later, on December 18, 1861, their third son, Edward Alexander (he discarded the middle name toward the end of his life), was born at 220 Clinton Street, New York—a neighbourhood which has since suffered the deterioration common to many of what were once among the town's most irreproachable residential districts.

From his father, a man of genuine aesthetic instincts, Edward derived his artistic tendencies and his Celtic sensitiveness of temperament, together with the pictorial instinct which was later to compete with his musical ability for decisive recognition; for the elder MacDowell displayed in his youth a facility as painter and draughtsman which his parents, who were Quakers of a devout and sufficiently uncompromising order, discouraged in no uncertain terms. The exercise of his own gift being thus restrained, Thomas MacDowell passed it on to his younger son—a somewhat superfluous endowment, in view of the fact that the latter was to demonstrate so ample a gift for an equally effective medium of expression.

MacDowell at fourteen(From a sketch drawn by himself)

Edward had his first piano lessons, when he was about eight years old, from a friend of the family, Mr. Juan Buitrago, a native of Bogota, Colombia, and an accomplished musician. Mr. Buitrago was greatly interested in the boy, and had asked to be permitted to teach him his notes. Their piano practice at this time was subject to frequent interruptions; for when strict supervision was not exercised over his work, Edward was prone to indulge at the keyboard a fondness for composition which had developed concurrently with, and somewhat at the expense of, his proficiency in piano technique. He was not a prodigy, nor was he in the least precocious, though his gifts were as evident as they were various. He was not fond of drudgery at the keyboard, and he lacked the miraculous aptness at acquirement which belongs to the true prodigy. He was unusual chiefly by reason of the versatility of his gifts. His juvenile exercises in composition were varied by an apt use of the pencil and the sketching board....