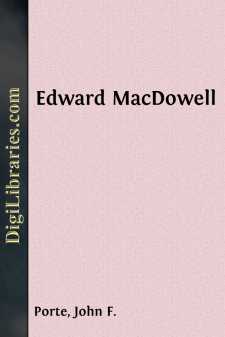 EDWARD ALEXANDER MACDOWELL was born in New York City, U.S.A., on December 18th, 1861, of American parents descended from a Quaker family of Scotch-Irish extraction who emigrated to America about the middle of the 18th Century. He was their third son. As a boy he studied the pianoforte with Juan Buitrago, a South American, Pablo Desvernine, a Cuban, and for a short time with the famous Venezuelan pianist, Teresa Carreño. He also indulged in childish composition on his own account. He was not a "wonderful" pupil and did not like the drudgery of practising "exercises."

When he was fourteen years of age he went to France, accompanied by his mother, to study pianoforte playing and the theory of music at the Paris Conservatoire under Marmontel and Savard respectively. Here one of his fellow students was Debussy, even then looked upon as having curious and unconventional ideas on his art.

MacDowell had also to learn the French language, and the person who taught him French discovered that the young American had a decided gift for drawing. He showed one of the boy's sketches to a teacher at the School of Fine Arts, who offered to take the boy as a pupil for three years free of charge, and to be responsible for his maintenance during that time.

With his striking imaginative powers and love of Nature, and his appreciation of Historical and Legendary lore, it is very probable that MacDowell might have become distinguished as a painter had he applied himself to painting, for he was a born artist and very fond of sketching, but he refused the offer on the advice of his music teachers, and continued his studies at the Conservatoire.

After persevering for a couple of years he grew dissatisfied with the tuition he was receiving, and upon hearing Nicholas Rubinstein play, he determined to go elsewhere.

Careful discussion with his mother resulted in their selection of Stuttgart, Germany, whither they accordingly removed, MacDowell entering the Conservatorium there. Here he was soon convinced, however, that the instruction given there was of no use to him, and after having studied under Lebert and Louis Ehlert and having been refused a hearing by Hans von Büllow, he left Stuttgart and entered the Frankfort Conservatorium, where his teachers were Raff, the Principal, for composition, and Carl Heymann for pianoforte playing. Raff was kind and encouraging to the young American, and once said to him, "Your music will be played when mine is forgotten." The influence of Raff's teaching is evident in a number of MacDowell's early compositions, especially the Forest Idyls, Op. 19, and the First Suite for Orchestra, Op. 42.

In 1881 Heyman resigned and nominated MacDowell as his successor, a proposal seconded by Raff. The gifted American, however, possessed the criminal fault, in the eyes of jealous and intolerant old men, of being young; the fact that he was quite capable of filling the vacant post was, to them, a secondary consideration, and he was rejected....