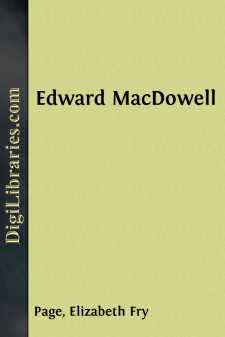 HIS WORK AND IDEALS

"Late explorers say they have found some nations that have no God; but I have not read of any that had no music." "Music means harmony, harmony means love, love means—God."—SIDNEY LANIER.

"Music is love in search of a word," said the same poet-musician. He was born full of the music and the love, and so was enabled to find and transmit to the world the undying word.

One cannot be a true poet, it seems to me, without at least an abiding love and sympathetic appreciation of the finest in music, or a great musician without a love of poetry and a responsiveness to its witchery. The two arts are interdependent and well nigh inseparable. A great musician may compose a song without words, but sooner or later there will be born a poet-soul who, hearing the song, will be irresistibly impelled to supply the words. On the other hand, many of the greatest musical compositions we have were inspired, like most of MacDowell's, by some poet's lines, a single figure, sentence or stanza furnishing the theme of oratorio, cantata, opera or ballad. Schubert's genius could be fired at any time, even under the most adverse conditions, by a beautiful poem, and many writers have received the inspiration for their masterpieces under the influence of music.

In some compositions combining both words and music, one will be very much the inferior of the other, and the thoughtful student or listener can but regret the discrepancy. Perhaps the words will be imposing and the musical setting trivial, or the music rich and full of color, but the words meaningless and inadequate. MacDowell's songs are satisfying. In his work he reminds one very forcibly of Sidney Lanier, whose genius was perfectly balanced. His music was full of poetry and his poetry ran over with music. His was an harmonious nature and no amount of external discord could cause him to lose his keynote. Applying his own beautiful words to himself:

"His song was only living aloud,  His work a singing with his hands."

Lanier played beautifully upon a silver flute, which he lovingly describes as "a petal on a harmony." He was a member of the Peabody Symphony orchestra of Baltimore, and Asger Hamerik, his director for six years, says of him: "In his hands the flute no longer remained a mere material instrument, but was transformed into a voice that set heavenly harmonies into vibration. Its tones developed colors, warmth and a low sweetness of unspeakable poetry. His conception of music was not reached by an analytic study of note by note, but was intuitive and spontaneous, like a woman's reason." In 1878 he played a flute concerto at a symphony concert, and the director said of him: "His tall, handsome, manly presence, his flute breathing noble sorrows, noble joys, the orchestra softly responding. The audience was spellbound. Such distinction, such refinement! He stood the master, the genius."

In studying MacDowell, one is reminded at every turn of this dual genius. Like Lanier, his message is being better understood every year, and now that he is gone, "fulfillment is dropping on a come-true dream."

MacDowell had great advantages over Lanier in his early life in freedom from financial worry....