Educational Work of the Girl Scouts 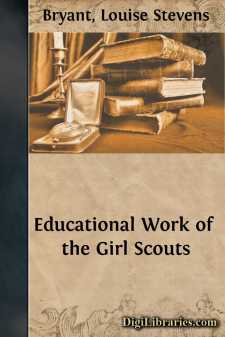 If you do, you believe in the Girl Scouts, for in this organization the girls learn all these things in such a happy way that they like to do them, which means that they keep on doing them.

The Girl Scouts, a national organization, is open to any girl who expresses her desire to join, and voluntarily accepts the promise and the laws. The object of the Girl Scouts is to bring to all girls the opportunity for group experience, outdoor life, and to learn through work, but more by play, to serve their community. Patterned after the Girl Guides of England, the sister organization of the Boy Scouts, the Girl Scouts have developed a method of self-government and a variety of activities that appear to be well suited to the desires of the girls, as the 89,864 scouts and the 2,500 new applicants each month testify.

Girl Scouts and their leaders, to the number of 89,864, were in 1920 organized in every State, and in Hawaii, Porto Rico, and Alaska. There are troops in 1,400 cities, and local councils in 162 places. This represents a tremendous growth since the founding by Mrs. Juliette Low in March, 1912, of a handful of enthusiastic “Girl Guides” in Savannah, Ga. In 1915 the growth of the movement warranted its national incorporation; so headquarters were established in Washington, D. C., and the name changed to Girl Scouts, Incorporated. In 1916 the headquarters were removed to New York, and are now located at 189 Lexington Avenue.

From the start the organization has been nonsectarian and open to all races and nationalities. Through the International Council the Girl Scouts are affiliated with the Girl Guides of England and all parts of the British Empire, and similar organizations in other parts of the world.

At the 1920 meeting of the international conference at London, reports were received from Italy, France, Belgium, Switzerland, Poland, Norway, Sweden, Denmark, Holland, Portugal, Russia, Czechoslovakia, Brazil, Argentina, Japan, China, and Siberia, as well as from all parts of the British Empire, and the United States.

From a membership of 9,769 in January, 1918, the girl scouts grew to 89,864 in 1921, at the rate of nearly 10 to 1 in three years. The greatest relative growth was in 1918, when the membership grew fourfold. During 1919 the increase over the preceding year was more than two-thirds, while in 1920 the relative increase was one-third. The details are as shown in the accompanying table.

This growth is due to a spontaneous demand of community after community for scouting for girls, and not to deliberate propaganda on the part of the national headquarters. The reasons for it are therefore to be sought in the activities and methods themselves, which make such widespread appeal.

A glance through the handbook, Scouting for Girls, will show that the activities of the girl scouts center about the three interests—Home, Health, and Citizenship.

Home.—The program provides incentives for practicing woman's world-old arts by requiring an elementary proficiency in cooking, housekeeping, first aid, and the rules of healthful living for any girl scout passing beyond the Tenderfoot stage....