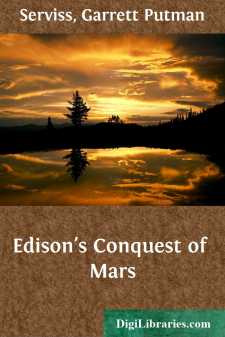 It is impossible that the stupendous events which followed the disastrous invasion of the earth by the Martians should go without record, and circumstances having placed the facts at my disposal, I deem it a duty, both to posterity and to those who were witnesses of and participants in the avenging counterstroke that the earth dealt back at its ruthless enemy in the heavens, to write down the story in a connected form.

The Martians had nearly all perished, not through our puny efforts, but in consequence of disease, and the few survivors fled in one of their projectile cars, inflicting their cruelest blow in the act of departure.

They possessed a mysterious explosive, of unimaginable puissance, with whose aid they set their car in motion for Mars from a point in Bergen County, N. J., just back of the Palisades.

The force of the explosion may be imagined when it is recollected that they had to give the car a velocity of more than seven miles per second in order to overcome the attraction of the earth and the resistance of the atmosphere.

The shock destroyed all of New York that had not already fallen a prey, and all the buildings yet standing in the surrounding towns and cities fell in one far-circling ruin.

The Palisades tumbled in vast sheets, starting a tidal wave in the Hudson that drowned the opposite shore.

The victims of this ferocious explosion were numbered by tens of thousands, and the shock, transmitted through the rocky frame of the globe, was recorded by seismographic pendulums in England and on the Continent of Europe.

The terrible results achieved by the invaders had produced everywhere a mingled feeling of consternation and hopelessness. The devastation was widespread. The death-dealing engines which the Martians had brought with them had proved irresistible and the inhabitants of the earth possessed nothing capable of contending against them. There had been no protection for the great cities; no protection even for the open country. Everything had gone down before the savage onslaught of those merciless invaders from space. Savage ruins covered the sites of many formerly flourishing towns and villages, and the broken walls of great cities stared at the heavens like the exhumed skeletons of Pompeii. The awful agencies had extirpated pastures and meadows and dried up the very springs of fertility in the earth where they had touched it. In some parts of the devastated lands pestilence broke out; elsewhere there was famine. Despondency black as night brooded over some of the fairest portions of the globe.

All Not Yet Destroyed.

Yet all had not been destroyed, because all had not been reached by the withering hand of the destroyer. The Martians had not had time to complete their work before they themselves fell a prey to the diseases that carried them off at the very culmination of their triumph.

From those lands which had, fortunately, escaped invasion, relief was sent to the sufferers....