Edgar Huntly or, Memoirs of a Sleep-Walker 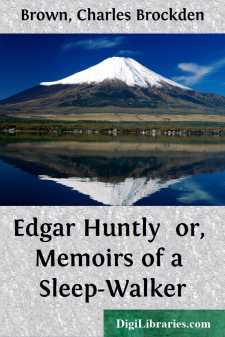 There ended his narrative. He started from the spot where he stood, and, without affording me any opportunity of replying or commenting, disappeared amidst the thickest of the wood. I had no time to exert myself for his detention. I could have used no arguments for this end, to which it is probable he would have listened. The story I had heard was too extraordinary, too completely the reverse of all my expectations, to allow me to attend to the intimations of self-murder which he dropped.

The secret which I imagined was about to be disclosed was as inscrutable as ever. Not a circumstance, from the moment when Clithero's character became the subject of my meditations, till the conclusion of his talk, but served to confirm my suspicion. Was this error to be imputed to credulity. Would not any one, from similar appearances, have drawn similar conclusions? Or is there a criterion by which truth can always be distinguished? Was it owing to my imperfect education that the inquietudes of this man were not traced to a deed performed at the distance of a thousand leagues, to the murder of his patroness and friend?

I had heard a tale which apparently related to scenes and persons far distant: but, though my suspicions have appeared to have been misplaced, what should hinder but that the death of my friend was, in like manner, an act of momentary insanity and originated in a like spirit of mistaken benevolence?

But I did not consider this tale merely in relation to myself. My life had been limited and uniform. I had communed with romancers and historians, but the impression made upon me by this incident was unexampled in my experience. My reading had furnished me with no instance in any degree parallel to this, and I found that to be a distant and second-hand spectator of events was widely different from witnessing them myself and partaking in their consequences. My judgment was, for a time, sunk into imbecility and confusion. My mind was full of the images unavoidably suggested by this tale, but they existed in a kind of chaos, and not otherwise than gradually was I able to reduce them to distinct particulars, and subject them to a deliberate and methodical inspection.

How was I to consider this act of Clithero? What a deplorable infatuation! Yet it was the necessary result of a series of ideas mutually linked and connected. His conduct was dictated by a motive allied to virtue. It was the fruit of an ardent and grateful spirit.

The death of Wiatte could not be censured. The life of Clithero was unspeakably more valuable than that of his antagonist. It was the instinct of self-preservation that swayed him. He knew not his adversary in time enough to govern himself by that knowledge. Had the assailant been an unknown ruffian, his death would have been followed by no remorse. The spectacle of his dying agonies would have dwelt upon the memory of his assassin like any other mournful sight, in the production of which he bore no part.

It must at least be said that his will was not concerned in this transaction....