Eating in Two or Three Languages 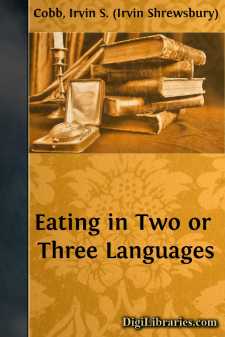 Eating in Two or Three Languages

On my way home from overseas I spent many happy hours mapping out a campaign. To myself I said: "The day I land is going to be a great day for some of the waiters and a hard day on some of the cooks. Persons who happen to be near by when I am wrestling with my first ear of green corn will think I am playing on a mouth organ. My behaviour in regard to hothouse asparagus will be reminiscent of the best work of the late Bosco. In the matter of cantaloupes I rather fancy I shall consume the first two on the half shell, or au naturel, as we veteran correspondents say; but the third one will contain about as much vanilla ice cream as you could put in a derby hat.

"And when, as I am turning over my second piece of fried chicken, with Virginia ham, if H. Hoover should crawl out from under it, and, shaking the gravy out of his eyes, should lift a warning hand, I shall say to him: 'Herb,' I shall say, 'Herb, stand back! Stand well back to avoid being splashed, Herb. Please desist and do not bother me now, for I am busy. Kindly remember that I am but just returned from over there and that for months and months past, as I went to and fro across the face of the next hemisphere that you'll run into on the left of you if you go just outside of Sandy Hook and take the first turn to the right, I have been storing up a great, unsatisfied longing for the special dishes of my own, my native land. Don't try, I pray you, to tell me a patriot can't do his bit and eat it too, for I know better.

"HERB, STAND BACK! STAND WELL BACK TO AVOID BEING SPLASHED!"

"'Shortly I may be in a fitter frame of mind to listen to your admonitions touching on rationing schemes; but not to-day, and possibly not to-morrow either, Herb. At this moment I consider food regulations as having been made for slaves and perhaps for the run of other people; but not for me. As a matter of fact, what you may have observed up until now has merely been my preliminary attack—what you might call open warfare, with scouting operations. But when they bring on the transverse section of watermelon I shall take these two trenching tools which I now hold in my hands, and just naturally start digging in. I trust you may be hanging round then; you'll certainly overhear something.'

"'Kindly pass the ice water. That's it. Thank you. Join me, won't you, in a brimming beaker? It may interest you to know that I am now on my second carafe of this wholesome, delicious and satisfying beverage. Where I have lately been, in certain parts of the adjacent continent, there isn't any ice, and nobody by any chance ever drinks water. Nobody bathes in it either, so far as I have been able to note. You'll doubtless be interested in hearing what they do do with it over on that side. It took me months to find out.

"'Then finally, one night in a remote interior village, I went to an entertainment in a Y.M.C.A. hut. A local magician came out on the platform; and after he had done some tricks with cards and handkerchiefs which were so old that they were new all over again, he reached up under the tails of his dress coat and hauled out a big glass globe that was slopping full of its crystal-pure fluid contents, with a family of goldfish swimming round and round in it, as happy as you please....