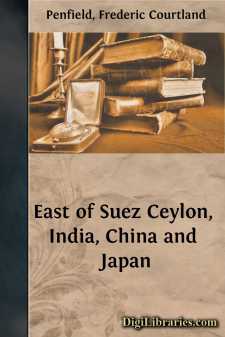 If books of travel were not written the stay-at-home millions would know little of the strange or interesting sights of this beautiful world of ours; and it surely is better to have a vicarious knowledge of what is beyond the vision than dwell in ignorance of the ways and places of men and women included in the universal human family.

The Great East is a fascinating theme to most readers, and every traveler, from Marco Polo to the tourist of the present time, taking the trouble to record what he saw, has placed every fireside reader under distinct obligation.

So thorough was my mental acquaintance with India through years of sympathetic study of Kipling that a leisurely survey of Hind simply confirmed my impressions. Other generous writers had as faithfully taught what China in reality was, and Mortimer Menpes, Basil Hall Chamberlain, and Miss Scidmore had as conscientiously depicted to my understanding the ante-war Japan. Grateful am I, as well, to the legion of tireless writers attracted to the East by recent strife and conquest, who have made Fuji more familiar to average readers than any mountain peak in the United States; who have made the biographies of favorite geishas known even in our hamlets and mining camps, and whose agreeable iteration of scenes on Manila's lunetta compel our Malaysian capital to be known as well as Coney Island and Atlantic City—they have so graphically portrayed and described interesting features that of them nothing remains to be told. But to know Eastern lands and peoples without an intermediary is keenly delightful and compensating.

The travel impulse and longing for first-hand knowledge, native with most mortals, is yearly finding readier expression. Our grandparents earned a renown more than local by crossing the Atlantic to view England and the Continent, while our fathers and mothers exploring distant Russia and the Nile were accorded marked consideration. The wandering habit is as progressive as catching, and what sufficed our ancestors satisfies only in minor degree the longing of the present generation for roving. Hence the grand tour, the circuit of the earth, is becoming an ordinary achievement. And while hundreds of Americans are compassing the earth this year, thousands will place the globe under tribute in seasons not remote.

For many years to come India and Ceylon will practically be what they are to-day, and sluggish China will require much rousing before her national characteristics differ from what they are now; but of Japan it is different, for, having made up their minds to remodel the empire, the sons of Nippon are not doing things by halves, and the old is being supplanted by the new with amazing rapidity.

Possibly it is a misfortune to find oneself incapable of preparing a volume of travel without inflicting a sermon upon kindly disposed persons, but a book of journeyings loaded with gentle preachment must at least be a novelty. Travel books imparting no patriotic lesson may well be left to authors and readers of older and self-sufficient nations....