Earthwork out of Tuscany Being Impressions and Translations of Maurice Hewlett 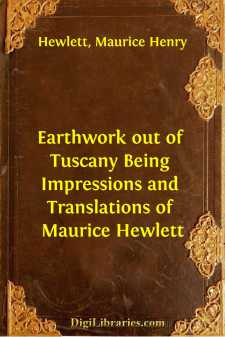 APOLOGIA PRO LIBELLO: IN A LETTER TO A FRIEND

Although you know your Italy well, you ask me, who see her now for the first time, to tell you how I find her; how she sinks into me; wherein she fulfils, and wherein fails to fulfil, certain dreams and fancies of mine (old amusements of yours) about her. Here, truly, you show yourself the diligent collector of human documents your friends have always believed you; for I think it can only be appetite for acquisition, to see how a man recognisant of the claims of modernity in Art bears the first brunt of the Old Masters' assault, that tempts you to risk a rechauffée of Paul Bourget and Walter Pater, with ana lightly culled from Symonds, and, perchance, the questionable support of ponderous references out of Burckhardt. In spite of my waiver of the title, you relish the notion of a Modern face to face with Botticelli and Mantegna and Perugino (to say nothing of that Giotto who had so much to say!), artists in whom, you think and I agree, certain impressions strangely positive of many vanished aspects of life remain to be accounted for, and (it may be) reconciled with modern visions of Art and Beauty. Well! I am flattered and touched by such confidence in my powers of expression and your own of endurance. I look upon you as a late-in-time Maecenas, generously resolved to defray the uttermost charge of weariness that a young writer may be encouraged to unfold himself and splash in the pellucid Tuscan air. I cannot assert that you are performing an act of charity to mankind, but I can at least assure you that you are doing more for me than if you had settled my accounts with Messr. Cook and Sons, or Signora Vedova Paolini, my esteemed landlady. A writer who is worth anything accumulates more than he gives off, and never lives up to his income. His difficulty is the old one of digestion, Italian Art being as crucial for the modern as Italian cookery. Crucial indeed! for diverse are the ways of the Hyperboreans cheek by jowl with asciutta and Tuscan tablewine, as any osteria will convince you. To one man the oil is a delight: he will soak himself in it till his thought swims viscid in his pate. To another it is abhorrent: straightway he calls for his German vinegar and drowns the native flavour in floods as bitter as polemics. Your wine too! Overweak for water, says one, who consumes a stout fiaschone and spends a stertorous afternoon in headache and cursing at the generous home-grown. Frizzante! cries your next to all his gods; and flushes the poison with infected water. Crucial enough. So with art. Goethe went to Assisi. "I left on my left," says he, "the vast mass of churches, piled Babel-wise one over another, in one of which rest the remains of the Holy Saint Francis of Assisi—with aversion, for I thought to myself that the people who assembled in them were mostly of the same stamp with my captain and travelling companion."

Truly an odd ground of aversion to a painted church that there might be a confessional-box in the nave! But he had no eyes for Gothic, being set on the Temple of Minerva....