Earths In Our Solar System Which Are Called Planets, and Earths In The Starry Heaven Their Inhabitants, And The Spirits And Angels There 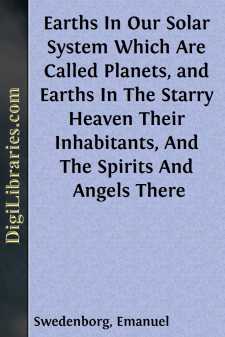 EARTHS IN THE UNIVERSE.

1. Inasmuch as, by the Divine mercy of the Lord, the interiors which are of my spirit have been opened in me, and it has thereby been given me to speak with spirits and angels, not only with those who are near our Earth, but also with those who are near other earths; and since I had an ardent desire to know whether there were other earths, and to know their character and the character of their inhabitants; it has been granted me by the Lord to speak and have intercourse with spirits and angels who are from other earths, with some for a day, with some for a week, with some for months; and to be instructed by them respecting the earths from and near which they were, and concerning the life, customs, and worship of their inhabitants, besides various other things there that are worthy of note. And since it has been given me to become acquainted with these matters in this way, it is permitted me to describe them from the things which I have heard and seen. It is necessary that it be known that all spirits and angels are from the human race, and that they are near their own earths, and are acquainted with what is upon them; and that a man may be instructed by them, if his interiors are so far opened as to enable him to speak and be in company with them: for man in his essence is a spirit, and is in company with spirits as to his interiors; wherefore he whose interiors are opened by the Lord, is able to speak with them, as man with man. It has now been granted me to enjoy this privilege daily for twelve years.

Footnote: From the ARCANA CŒLESTIA: in which work these and subsequent articles, which are inserted below the line, are explained and shown. Footnote a:

There are no spirits and angels who are not from the human race, no. 1880.

The spirits of every earth are near their own earth, because they are of its inhabitants, and of a similar genius; and they are meant to be of service to them, no. 9968.

2. That there are many earths, and men upon them, and spirits and angels from them, is very well known in the other life; for in that life, every one who from a love of the truth and consequent use desires it, is allowed to speak with the spirits of other earths, so as to be convinced that there is a plurality of worlds, and informed that the human race is not from one earth only, but from numberless earths; and so as to be informed, besides, of what genius and life they are, and of what character their Divine worship is....