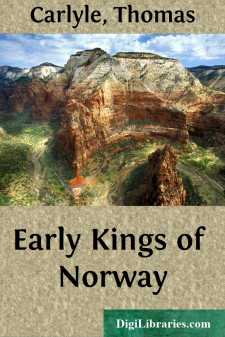 Till about the Year of Grace 860 there were no kings in Norway, nothing but numerous jarls,—essentially kinglets, each presiding over a kind of republican or parliamentary little territory; generally striving each to be on some terms of human neighborhood with those about him, but,—in spite of "Fylke Things" (Folk Things, little parish parliaments), and small combinations of these, which had gradually formed themselves,—often reduced to the unhappy state of quarrel with them. Harald Haarfagr was the first to put an end to this state of things, and become memorable and profitable to his country by uniting it under one head and making a kingdom of it; which it has continued to be ever since. His father, Halfdan the Black, had already begun this rough but salutary process,—inspired by the cupidities and instincts, by the faculties and opportunities, which the good genius of this world, beneficent often enough under savage forms, and diligent at all times to diminish anarchy as the world's worst savagery, usually appoints in such cases,—conquest, hard fighting, followed by wise guidance of the conquered;—but it was Harald the Fairhaired, his son, who conspicuously carried it on and completed it. Harald's birth-year, death-year, and chronology in general, are known only by inference and computation; but, by the latest reckoning, he died about the year 933 of our era, a man of eighty-three.

The business of conquest lasted Harald about twelve years (A.D. 860-872?), in which he subdued also the vikings of the out-islands, Orkneys, Shetlands, Hebrides, and Man. Sixty more years were given him to consolidate and regulate what he had conquered, which he did with great judgment, industry and success. His reign altogether is counted to have been of over seventy years.

The beginning of his great adventure was of a romantic character.—youthful love for the beautiful Gyda, a then glorious and famous young lady of those regions, whom the young Harald aspired to marry. Gyda answered his embassy and prayer in a distant, lofty manner: "Her it would not beseem to wed any Jarl or poor creature of that kind; let him do as Gorm of Denmark, Eric of Sweden, Egbert of England, and others had done,—subdue into peace and regulation the confused, contentious bits of jarls round him, and become a king; then, perhaps, she might think of his proposal: till then, not." Harald was struck with this proud answer, which rendered Gyda tenfold more desirable to him. He vowed to let his hair grow, never to cut or even to comb it till this feat were done, and the peerless Gyda his own. He proceeded accordingly to conquer, in fierce battle, a Jarl or two every year, and, at the end of twelve years, had his unkempt (and almost unimaginable) head of hair clipt off,—Jarl Rognwald (Reginald) of More, the most valued and valuable of all his subject-jarls, being promoted to this sublime barber function;—after which King Harald, with head thoroughly cleaned, and hair grown, or growing again to the luxuriant beauty that had no equal in his day, brought home his Gyda, and made her the brightest queen in all the north....